Spain… Spain… where to start… Spain is a large country by European standards, clocking in around the same size as Texas. When I think of Spain, I think of tapas, bullfights, flamenco dance, mountains, lisps, and my high school Spanish teacher telling me this is where you need to use the vosotros verb conjugations. It is a diverse country and, like Portugal, it is a mix of old and new, modern in traditional. You have the craggy peaks and trekker’s paradise of the Pyrenees; religious sights, lavish Muslim (Moorish) palaces, massive cathedrals, and the Camino de Santiago; the seductive rhythms of flamenco; tapas, wine, culinary delights; and most importantly the siesta (Kelley: we rarely had time for siestas……) and fiesta.

After a couple relaxing days in Lagos, Portugal, Kelley and I took a bus to Spain. As I mentioned earlier, Spain is HUGE, so we were only exploring a sliver of the southern part. During our Tour de Mont Blanc hike, we met this German couple who told us we needed at least 8 weeks to explore Spain, so we looked at this trip more of a reconnaissance trip, an aperitivo, for many adventures to come.

Our first stop was Seville! As what often happens traveling Kelley and I arrived a bit hungry, although Kelley was entering hangry (hungry + angry) territory. Luckily, I had a tapas place in mind for some quick grub before we entered dark territory.

Seville is a tangle of flamboyant colorful little streets overflowing with restaurants, bars, and history. As with many major cities in Europe, Seville was originally a Roman city. Later it became one of the most powerful kingdoms in Muslim Spain until it fell in 1248 to the Spanish crusaders. The golden age started in the early 16th century when it was awarded a monopoly of Spanish trade with the American continent. At the time, the river, Río Guadalquivir, running through the heart of the city was navigable to the Atlantic Ocean 100 km away, so it did not take long for Sevilla to rapidly become one of the richest cities in the world. I like to imagine that some of the lavish gold and sliver work we saw in many of the churches was actually precious metals from the America – quite a startling thought… and then of course, there was a plague and the river silted up, which led to the slow decline of the city’s wealth and predominance on the world stage.

After finding our accommodations (Hotel Abanico, a converted 19th century mansion), we took a siesta for a hour or so fully embracing the Spanish lifestyle and a necessity if you want to be out late when the city comes alive. After waking from our slumber, we walked to the cathedral “El Divino Salvador” to get our fill of baroque architecture.

After our baroque architecture experience, we walked to “THE Cathedral”. It was originally a mosque but after the Spanish Reconquista (1248), it was converted into a church. Then in the 15th and 16th centuries, when the increasing wealth of the city, the locals wanted to “…build a church so beautiful and so grand that those who see it finished will think we are mad.” And boy were they mad! When it was finished, it was the largest cathedral in the world, over taking the Hagia Sophia in Turkey. Today it ranks around 3rd largest depending on how you define church. We were only able to appreciate it from the outside today since it was closing time.

The next day we got an early start and headed into the cathedral. Our first stop was to hike up to the top of the bell tower. In Moorish times, it was a minaret of the mosque. Five times a day the mu’addhin had to make the trek up to the top of the minaret to have the call to prayer but to make this easier the architects had ramps installed instead of stairs (Kelley: I think they had to bring a donkey up too?). The view from the top was beautiful! 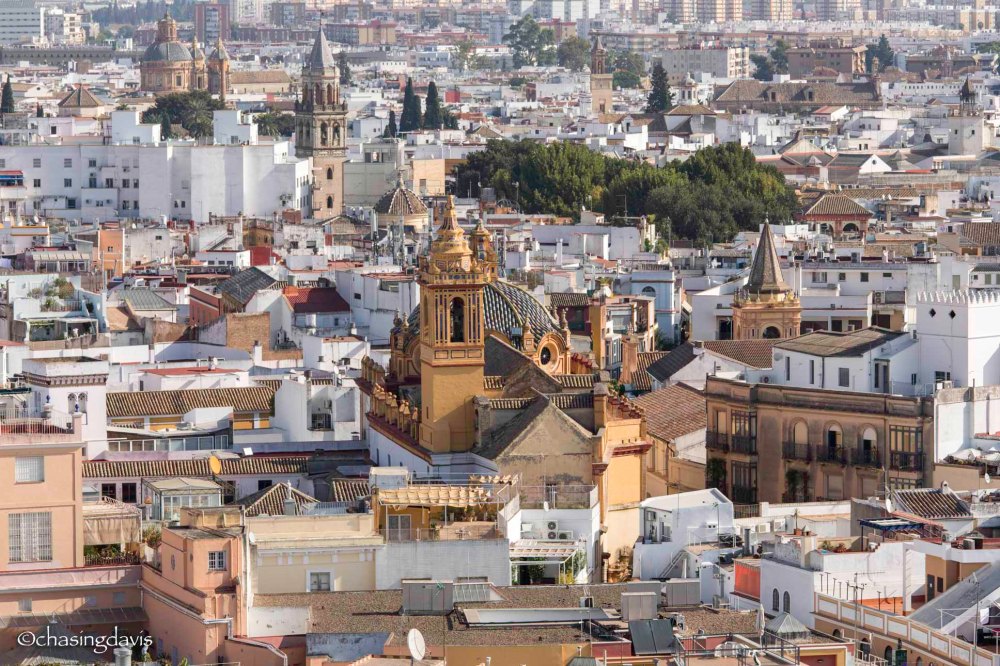 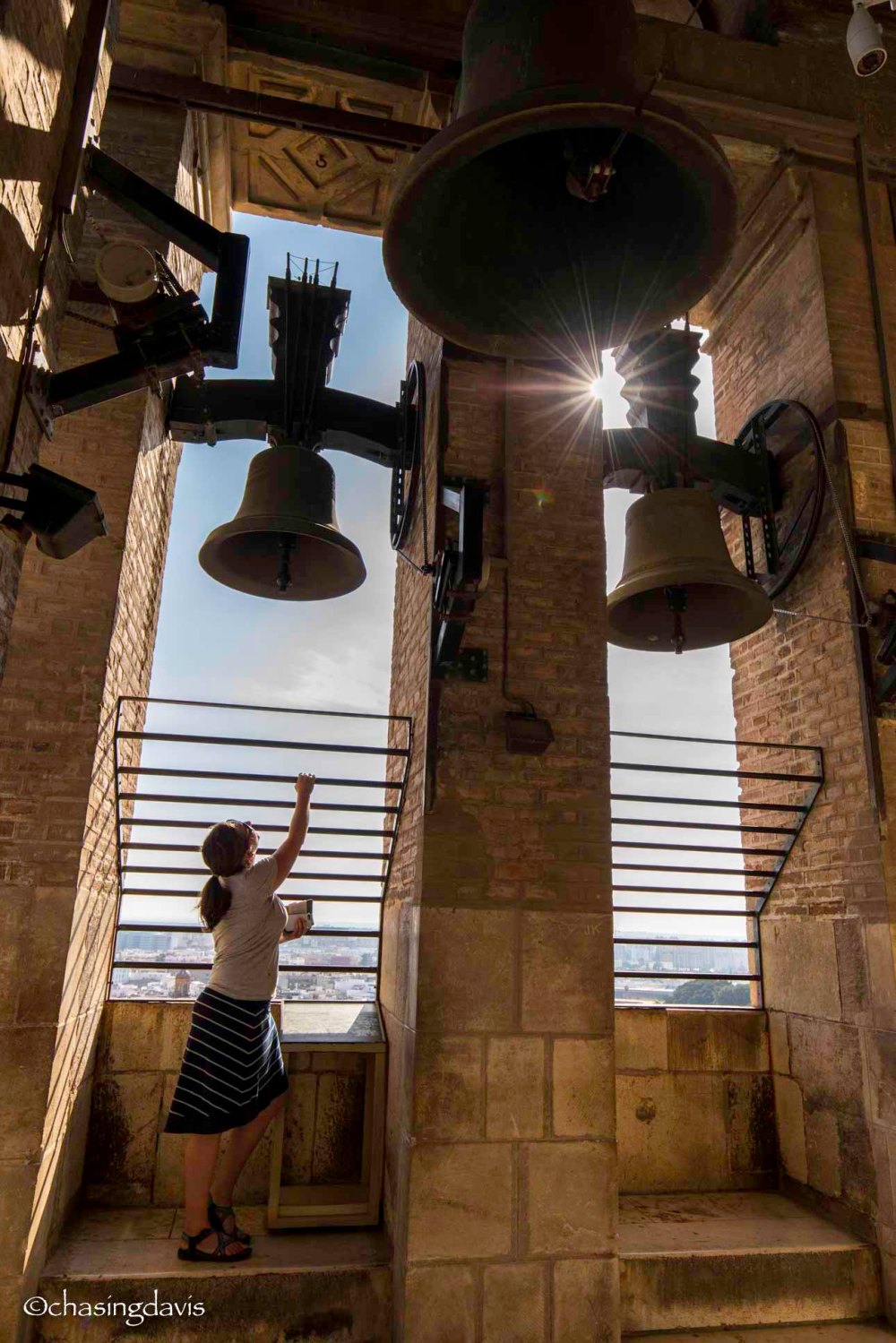 After the bell tower, we explored the inside of the church… 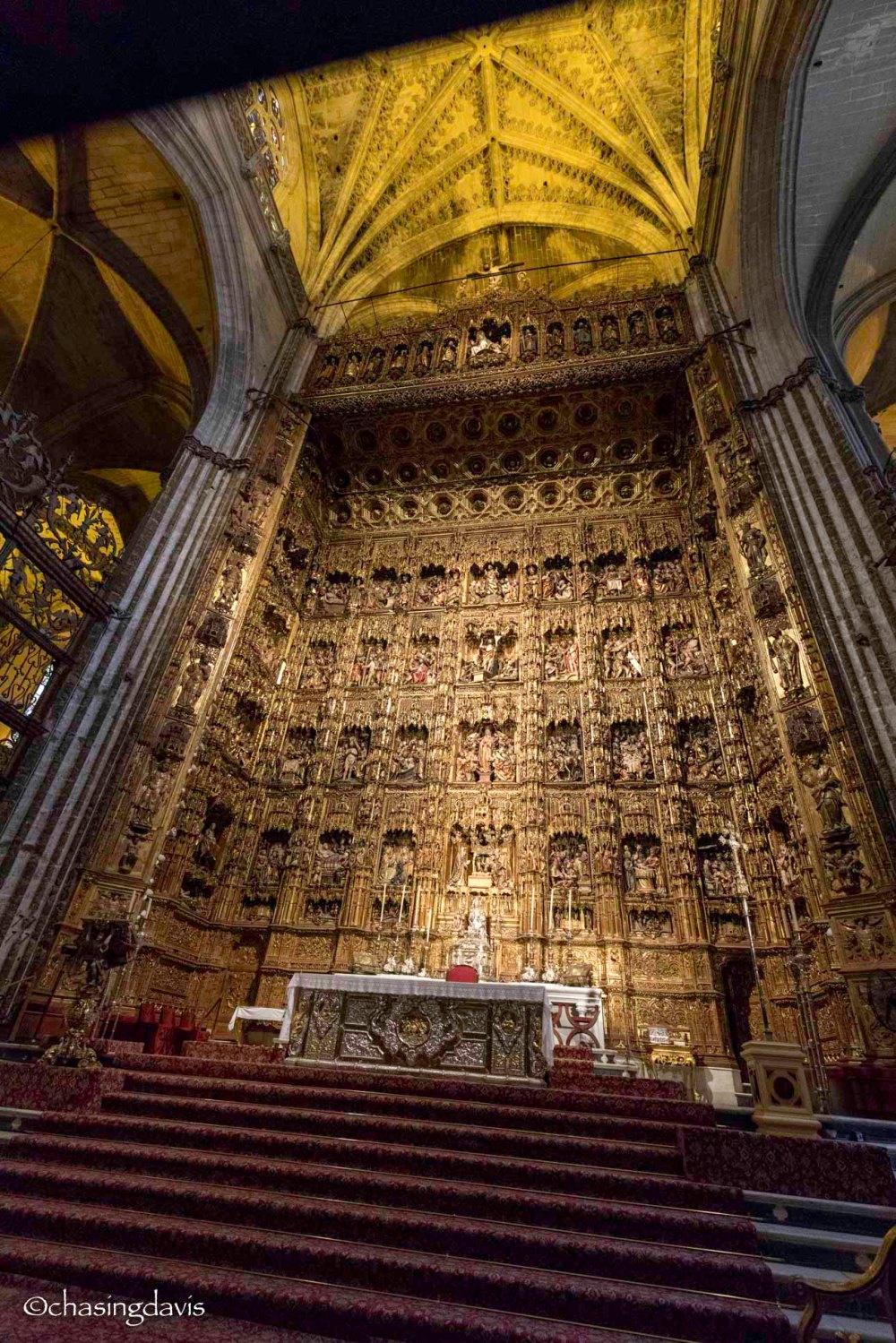 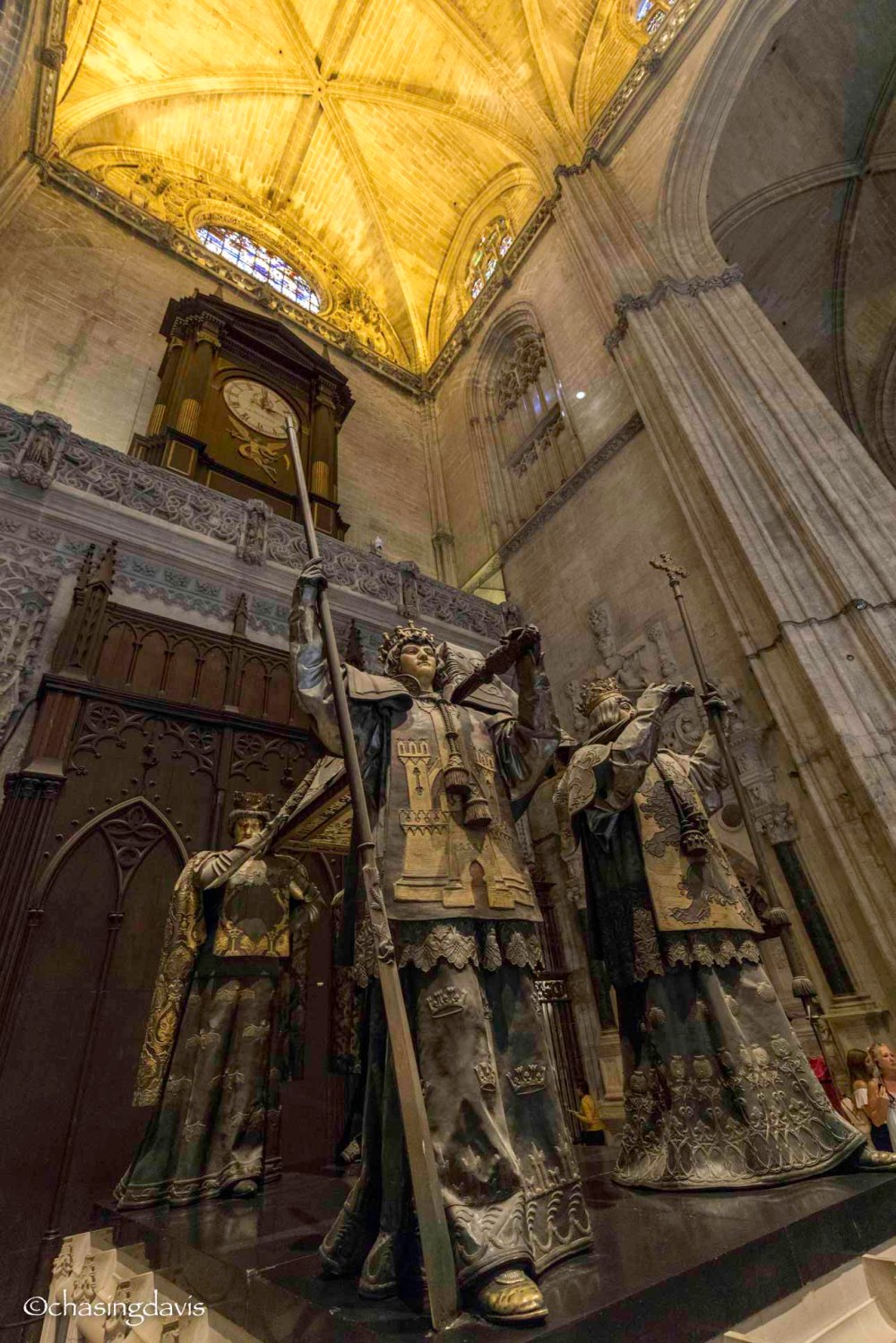 Out final stop in Sevilla was the Archivo de Indias, which houses the records from Spain’s colonies. We only saw a small piece and no actual documents of significance but the archive has nine kilometers of shelving, in 43,000 volumes and some 80 million pages.

Actually this was our final stop – Bolas! We had it the night before and it was so delicious and unique we got it again! The scooper behind the counter was a delight and gave us so many tastings. I think she was also entertained by our excellent Spanish! 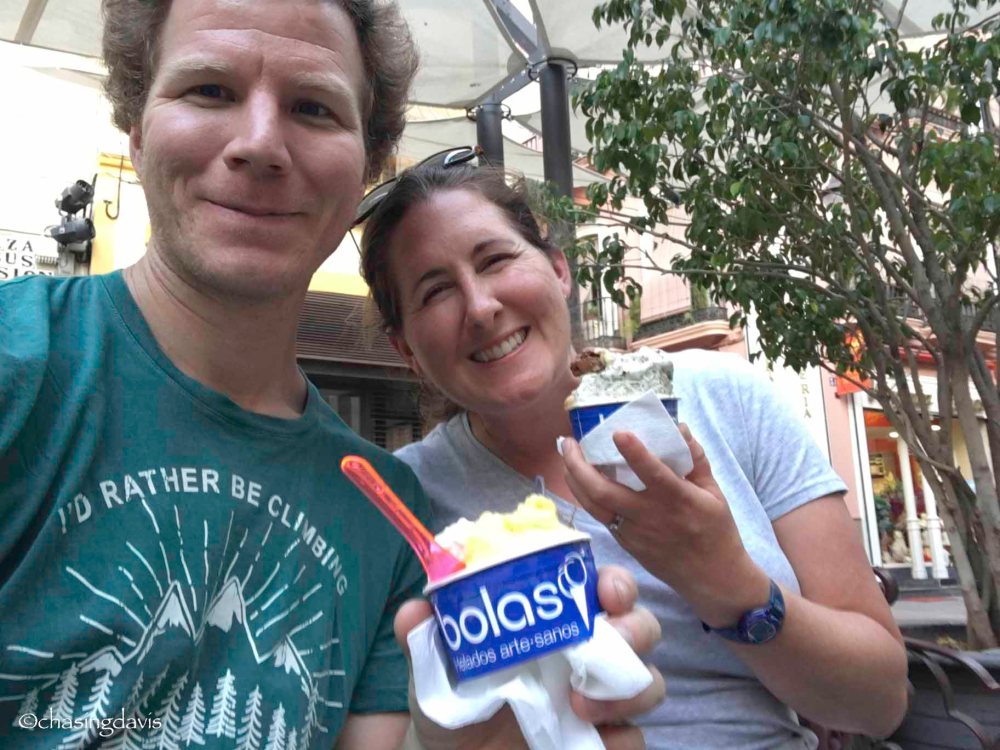 After visiting the archives (and getting ice cream (Kelley: WHoa Matt, you didn’t mention we got this ice cream TWICE in the span of 12 hours! The lady laughed when she saw us come in again!  IT WAS SO GOOD!)), we took a taxi to the Sevilla airport and rented a car. An hour of paperwork later, fear mongering that we were making a mistake not accepting their insurance or having international drivers licences, and creating a comprehensive video inspection of the car we were off to Cordoba!

Similar to Sevilla, Cordoba was originally a Roman city until it was conquered by the Moors in 711 and soon became the Moorish capital on the Iberian Peninsula. It straddles the same river as Sevilla, Rio Guadalquivir, but that is where the similarities end. After the reconquista in 1236 the city had a slow declining political importance, which is fortunate because the main attraction in the city, the Mezquita, is a still remarkably well preserved mosque that is incredibly beautiful. Surrounding the Mezquita, are a bramble of streets and lanes, tourist shops, restaurants, and tapas bars.

The next morning we headed into the Mezquita and it was incredible! 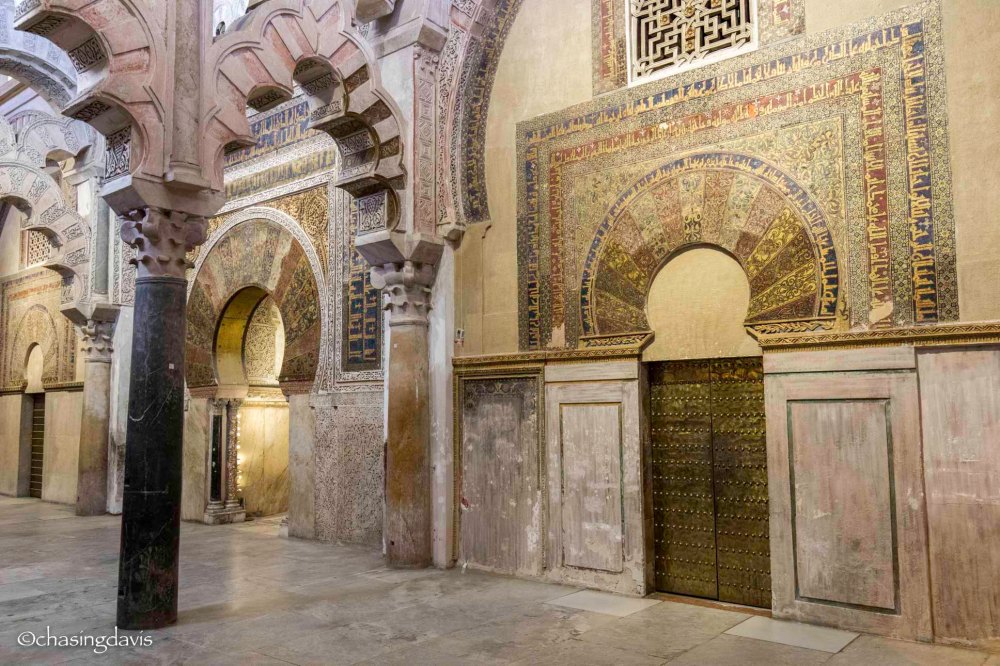 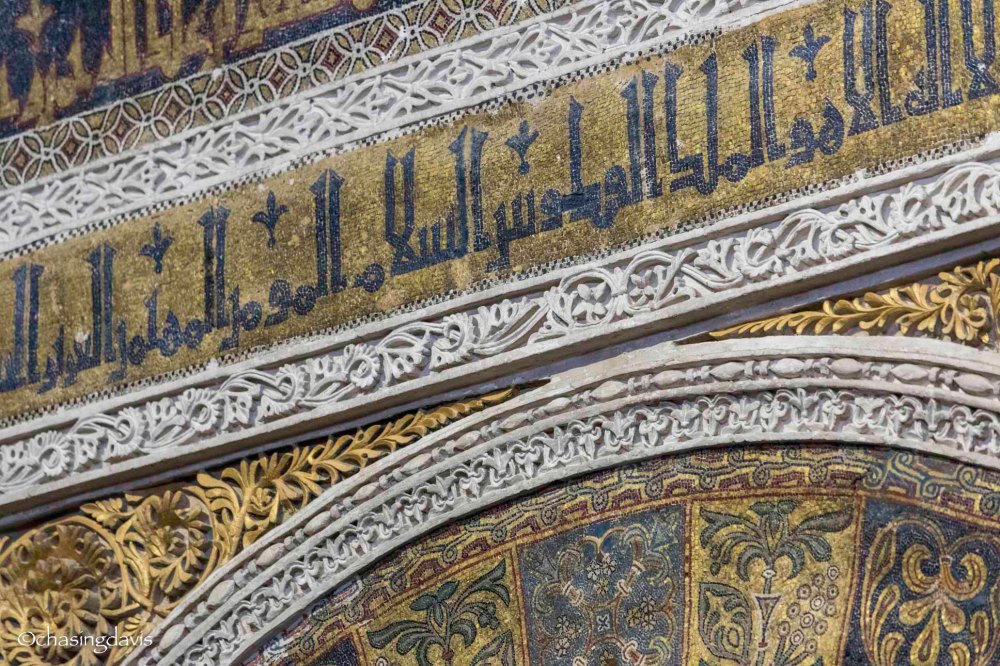 Inside the center of the mosque, and to put a point on who was in charge, the Catholics build a cathedral which is equally impressive.  (Kelley: it was incredible to find a full-blown cathedral smack-dab in the middle of this gigantic mosque.  Its like a mind-trick meandering between the two spaces and reminding yourself you’re still in the same building) 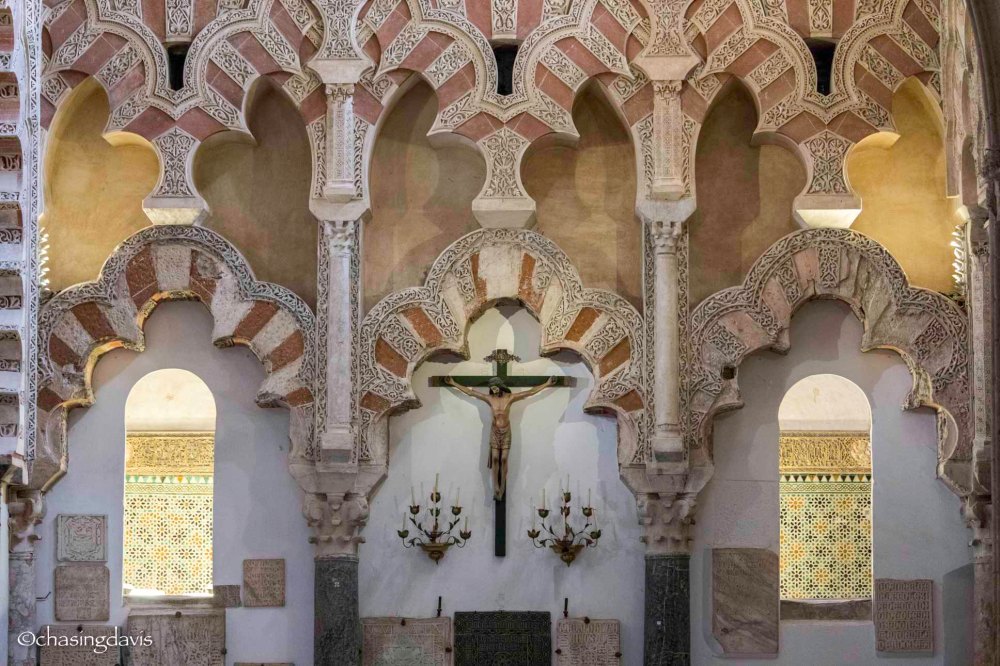 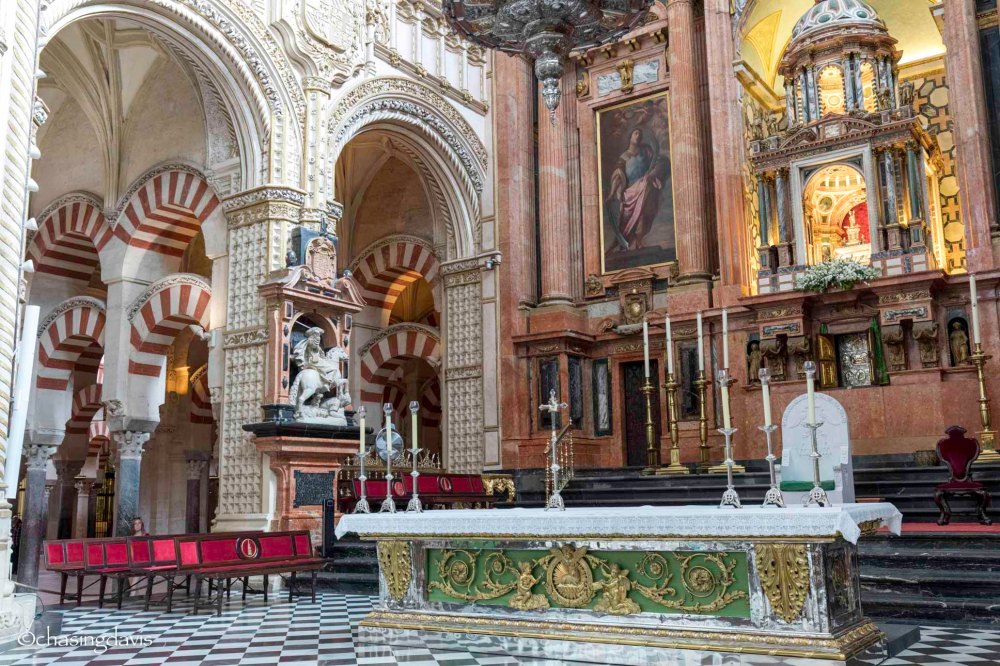 After a blissful day in Cordoba, we zoomed to Granada – the place I was incredibly excited for since I studied it in my college architecture class and boy it didn’t disappoint. Nestled into the foot of the Sierra Nevada mountains, Granada was the last Moorish stronghold on the Iberian peninsula. After the fall of Cordoba (1236) and Seville (1248), the Moors consolidated their power here and constructed a lavish Alhambra palace complex as you shall soon see. In 1492, the Moors finally surrendered the city to none other than Queen Isabel and King Ferdinand, who establish a permanent residence in the Alhambra. As part of the deal the Moors handed over the keys to the city and surrounding valleys, political and religious freedom for the Muslims (soon rescinded), and most significantly a lot of gold coins (the books say 30,000 but what does that mean?). It was here, later in 1492, that Christopher Columbus asked for endorsement from the Queen and King and likely received it due to there increased wealth – crazy! Amazingly after being a royal residence for a couple of centuries, the Alhambra was more or less abandoned and occupied by gypsies until it was “rediscover” in the 19th century, most significantly by Washington Irving who wrote The Tales of the Alhambra within its walls.

To get acquainted with the city, we did a walking tour with Cicerone Granada, which was very informative and took us to a lot of places we would have never gone. Due to the utter neglect and vandalism within the walls of the Alhambra it needed to be heavily restored. As a result, the colors we see today are not necessarily how they looked at the time of construction. Fortunately there is the Palacio de la Madraza, which was a Islamic school and whose walls were covered with wood paneling for the last 500 years and were rediscovered…

Okay… enough babbling… let’s get to the Alhambra! The walk to the Alhambra is an enchanting uphill stroll along a lush, treed path with a soothing stream of water trickling down from fountains above. 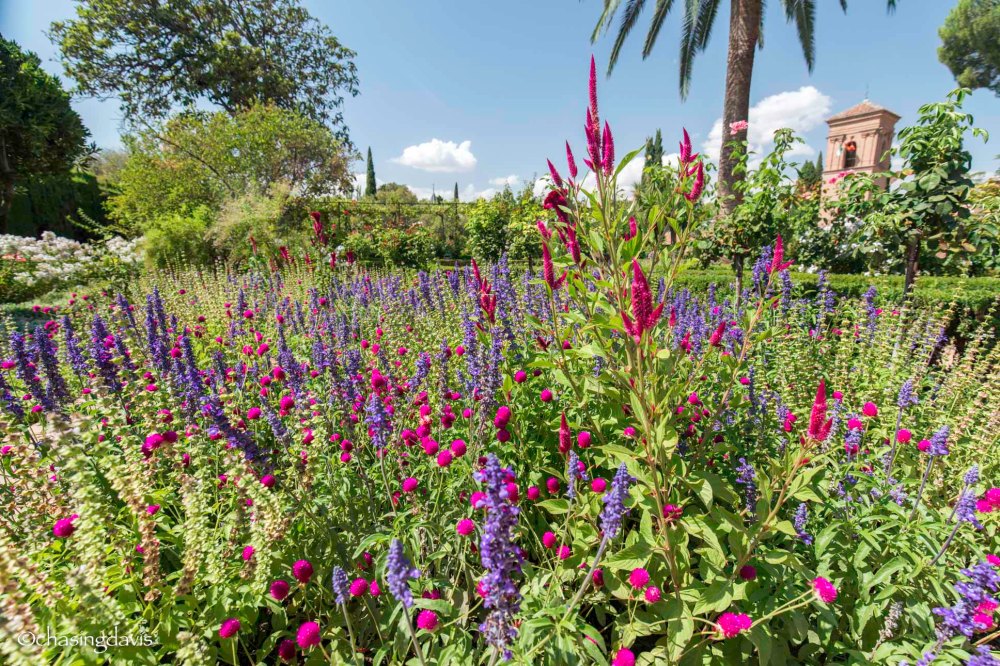 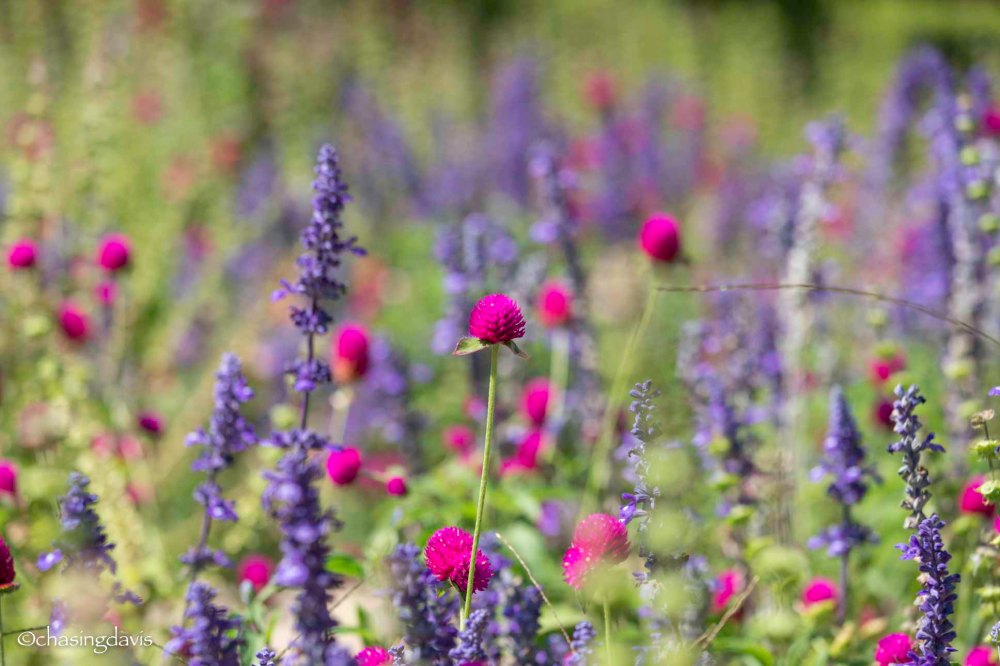 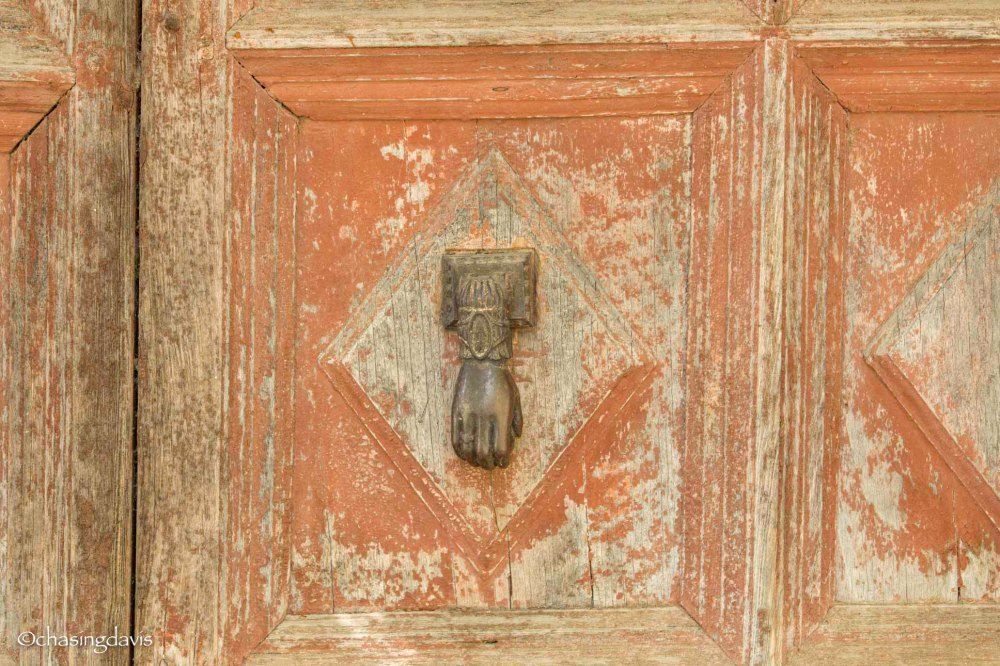 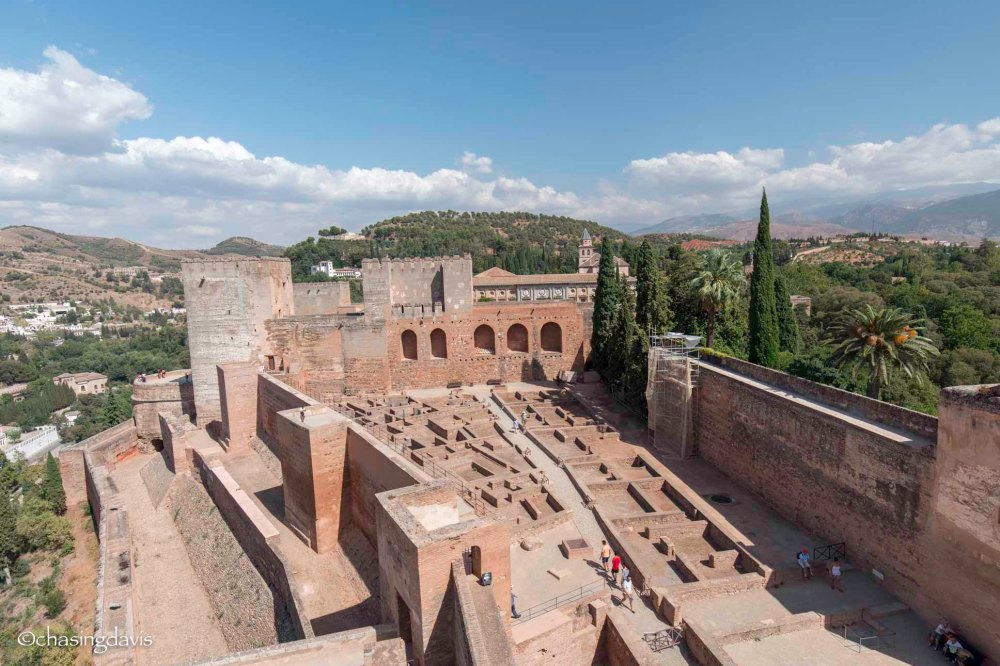 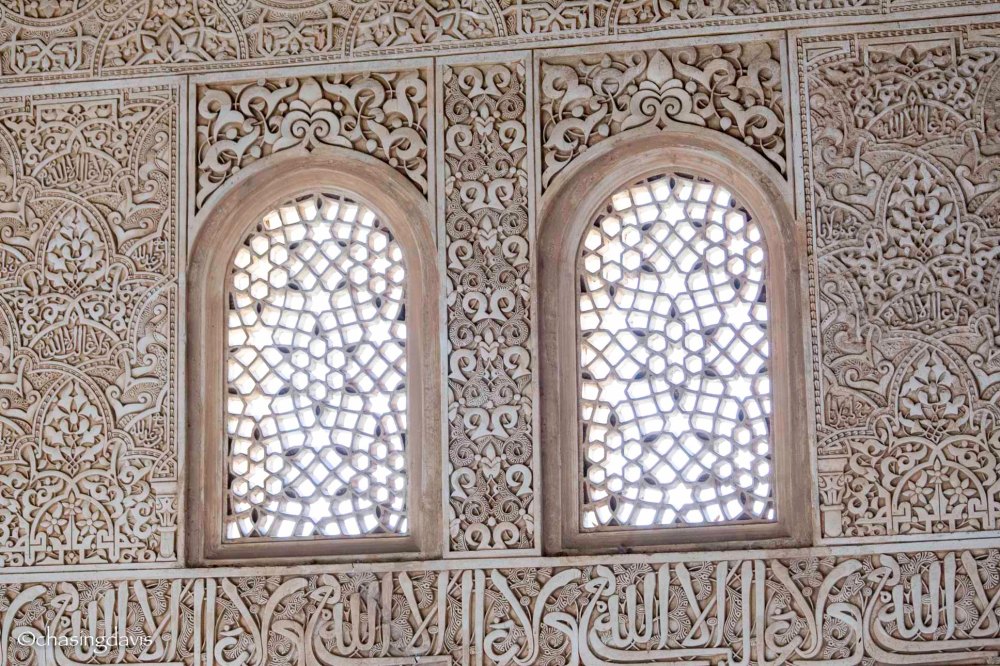 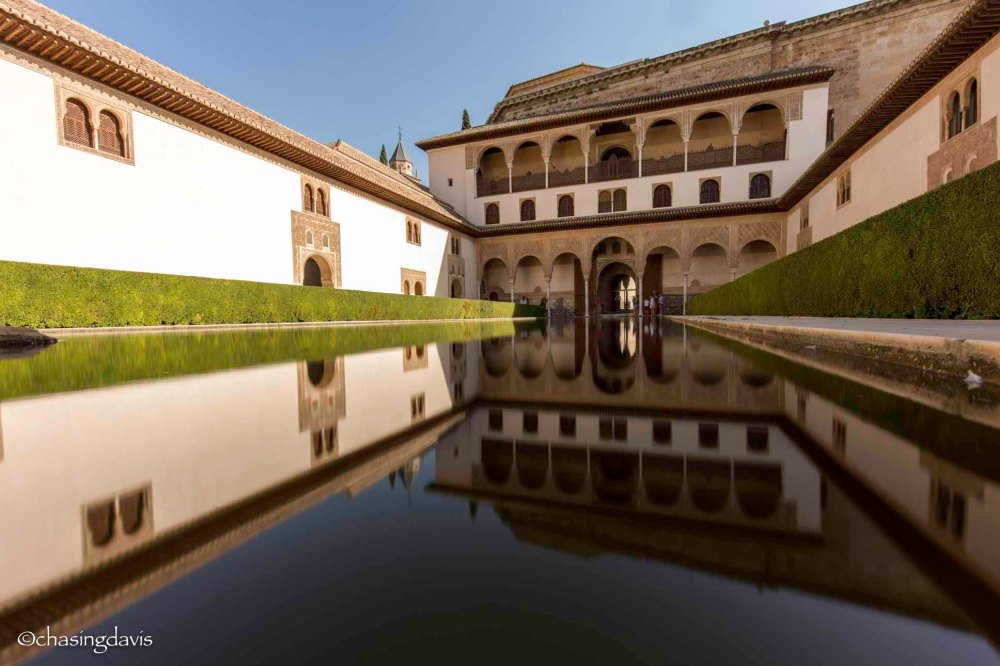 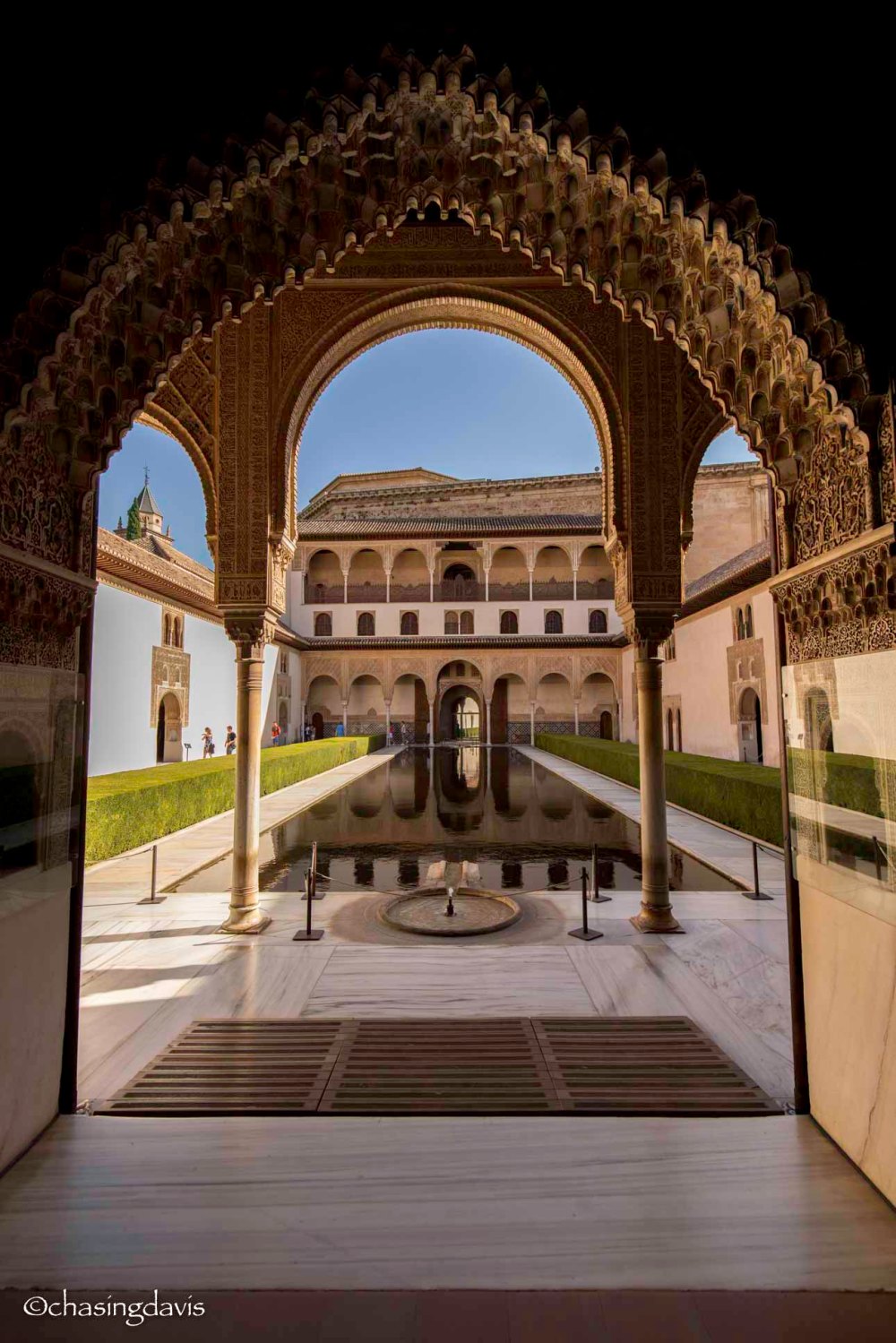 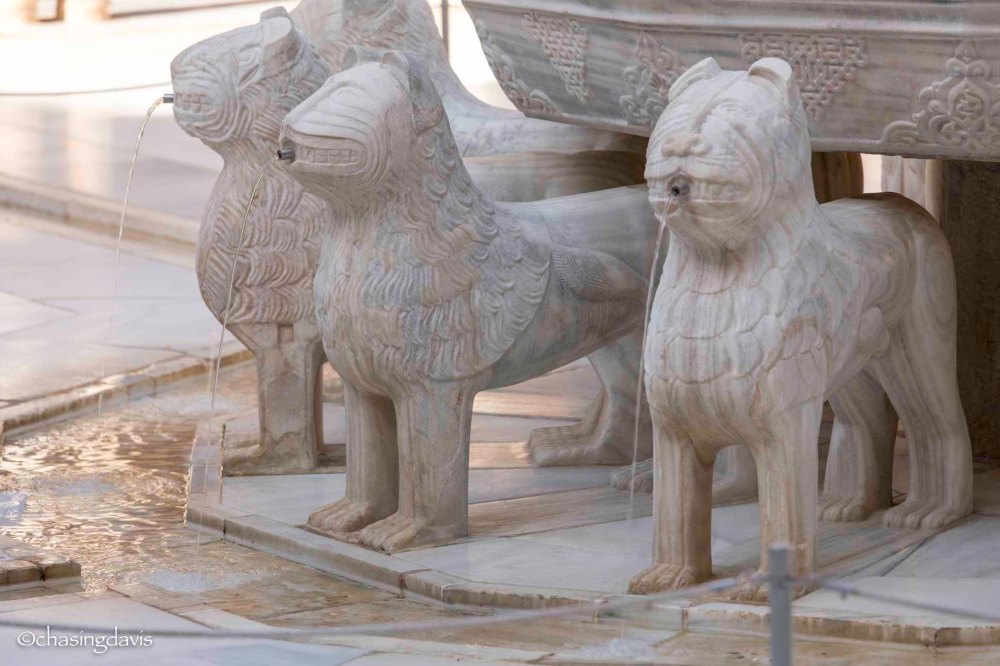 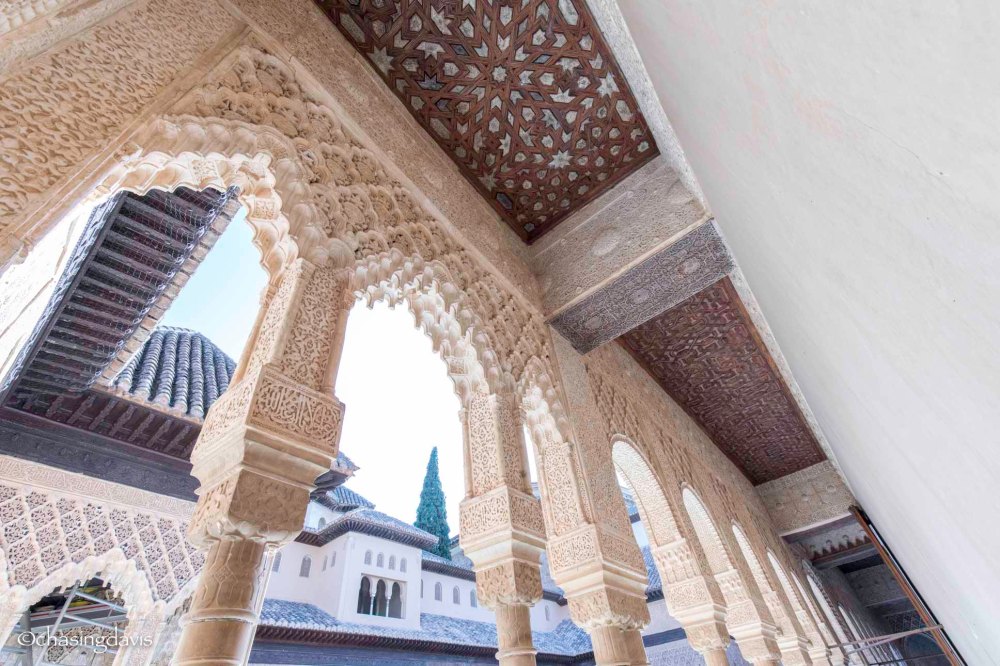 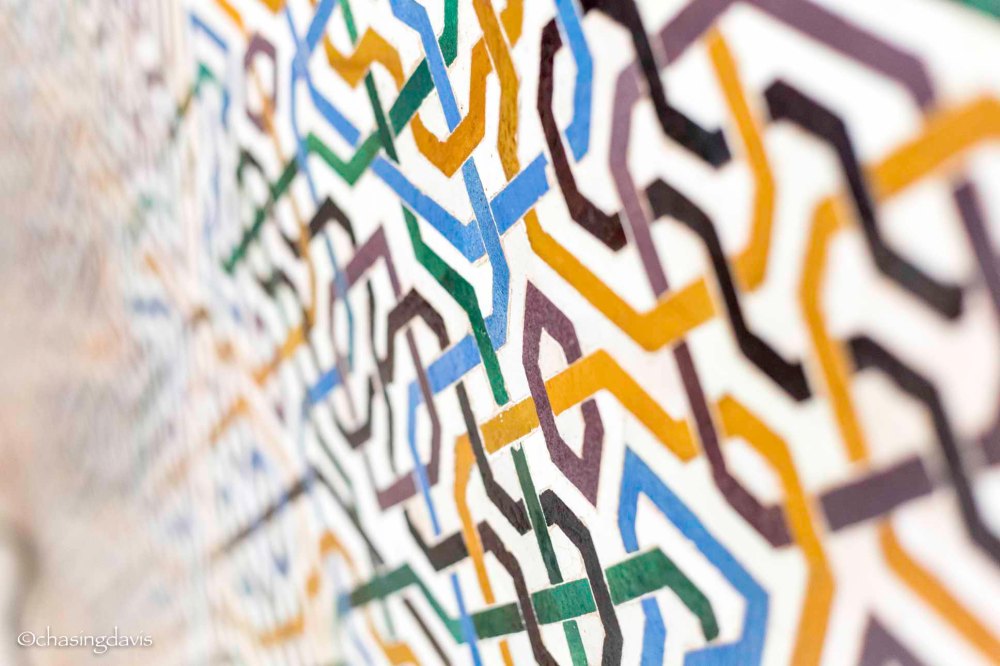 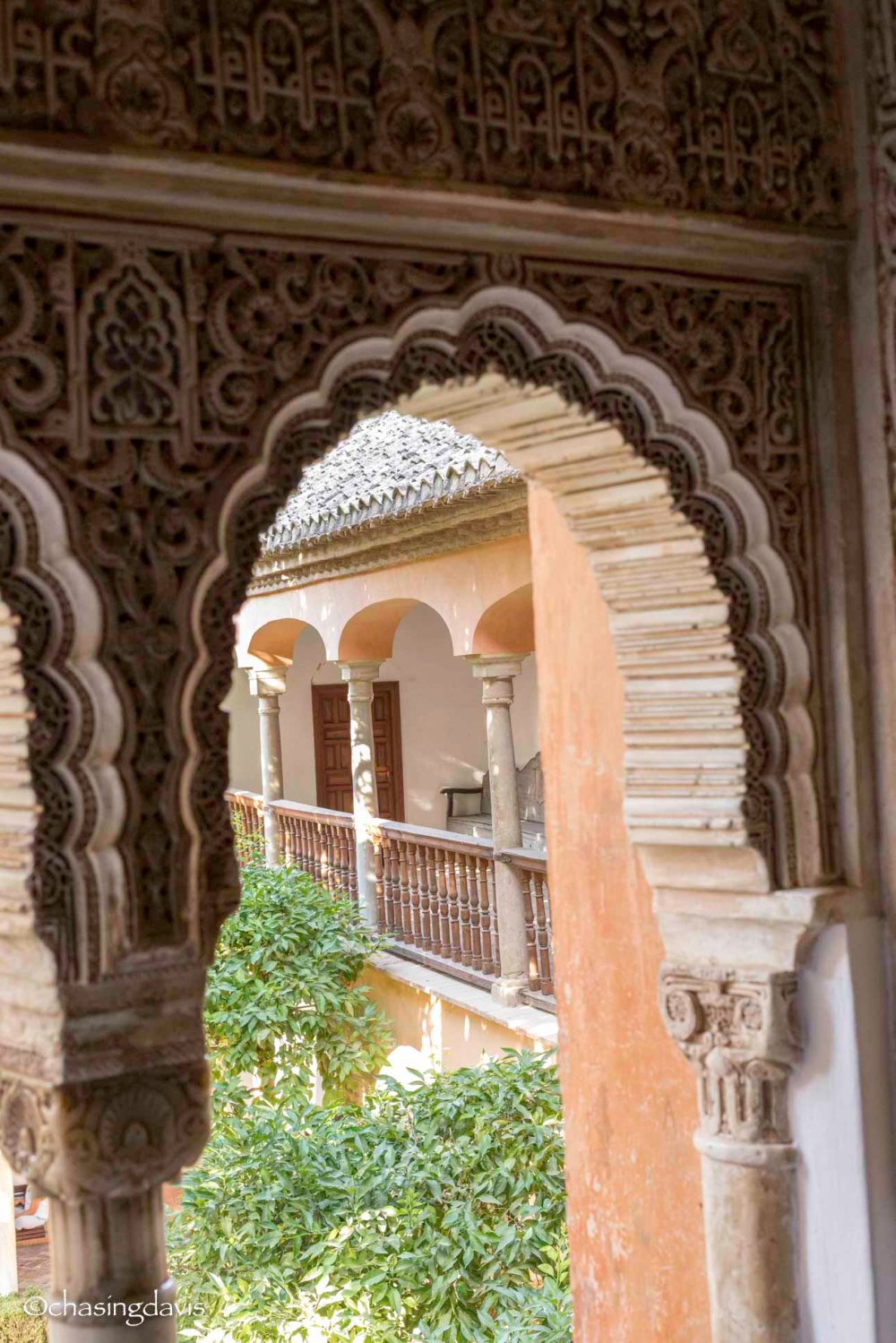 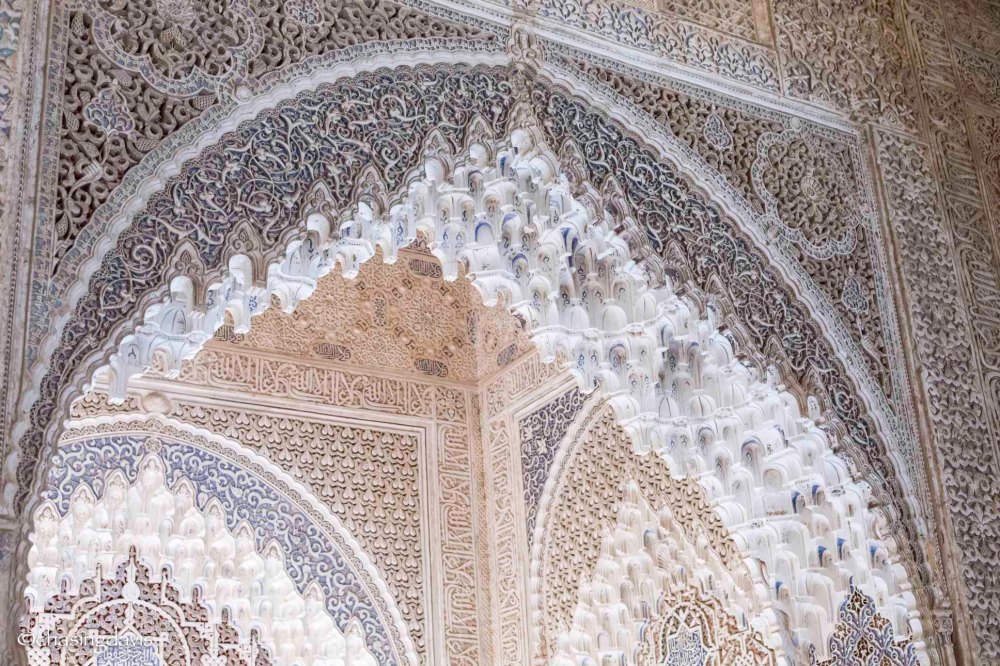 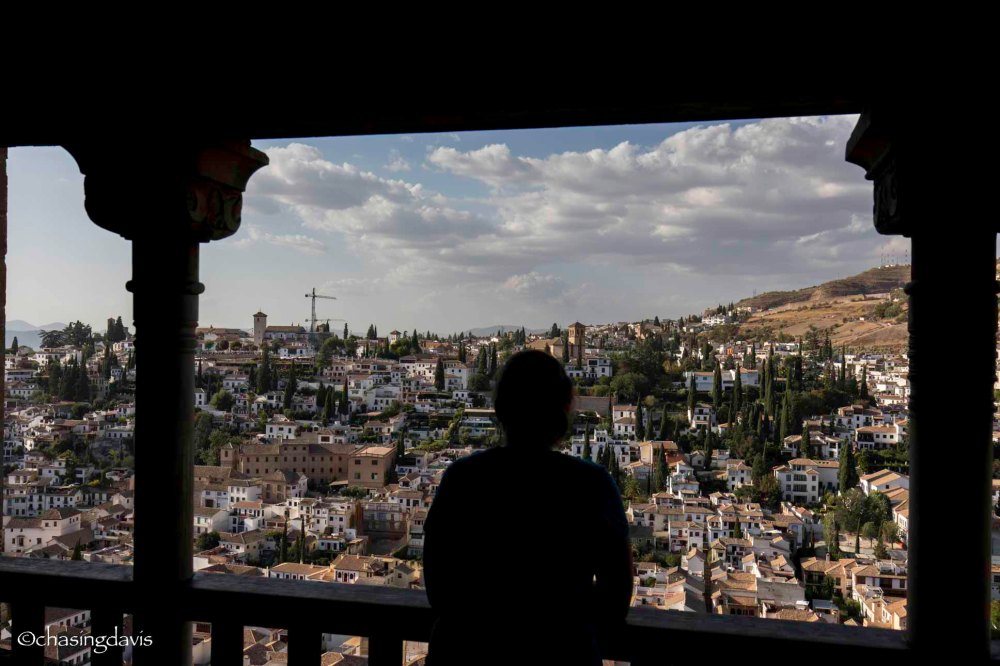 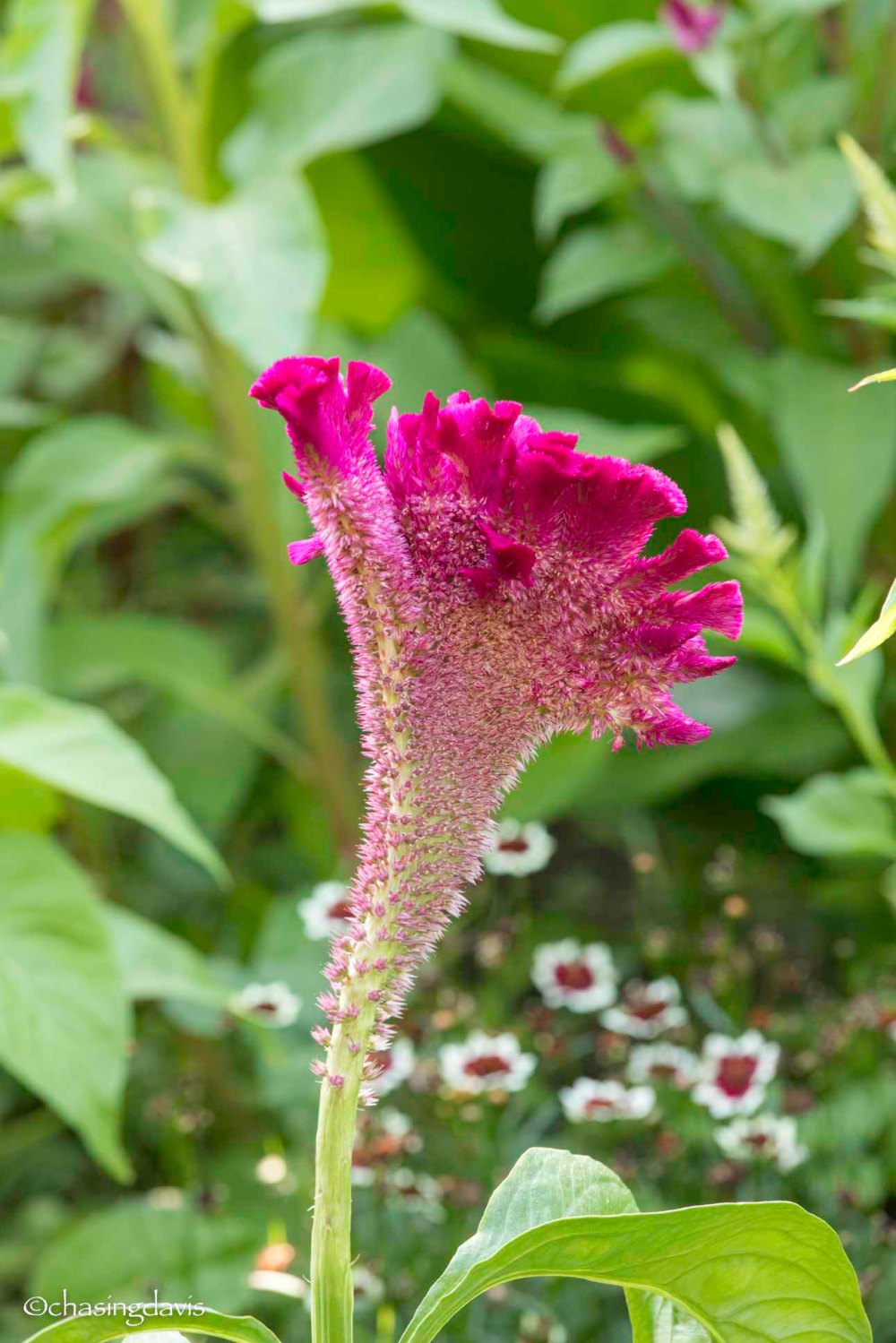 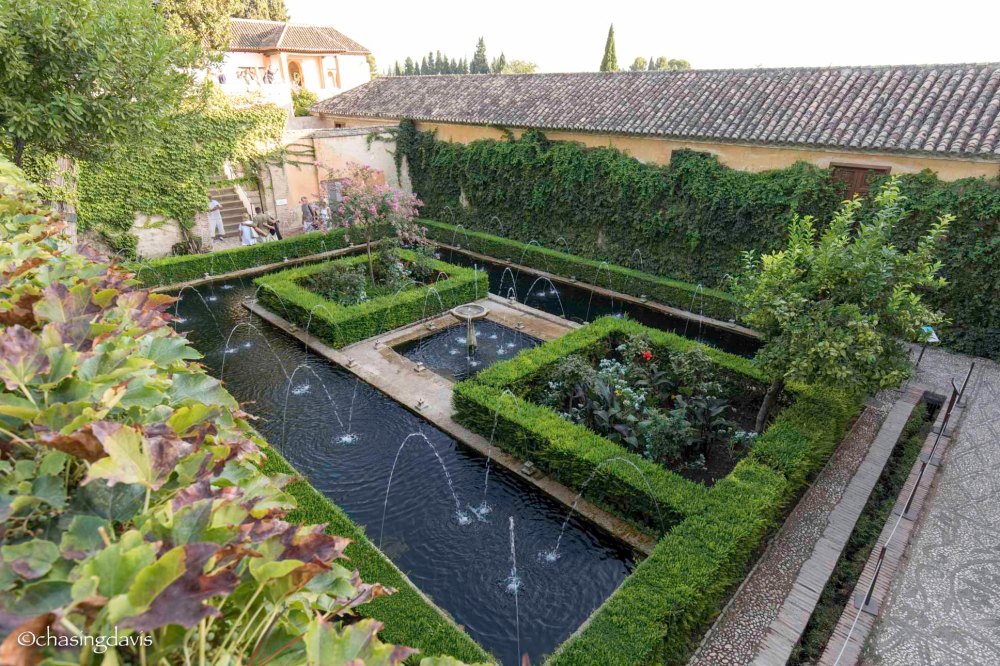 Our final stop was Ronda, which is one of the classic white-hilled towns of Andalucía and a chance for us to get out of the hubbub of the big cities. When we were planning the trip we were amazed at the cost and lack of accommodations in Ronda, so we had to book a place outside town. When we arrived we understood why… you see… Ronda is the birthplace of modern bull fighting in the 18th century and we (and about 20,000 others) were in Ronda for the biggest (and only) bull fight of the year! We naively thought we could get tickets the day of the fight – no dice – so we just soaked it all in from the streets… besides we were quite under dressed. I forgot my bull fighting cape and tights and Kelley forgot her dress – next time! 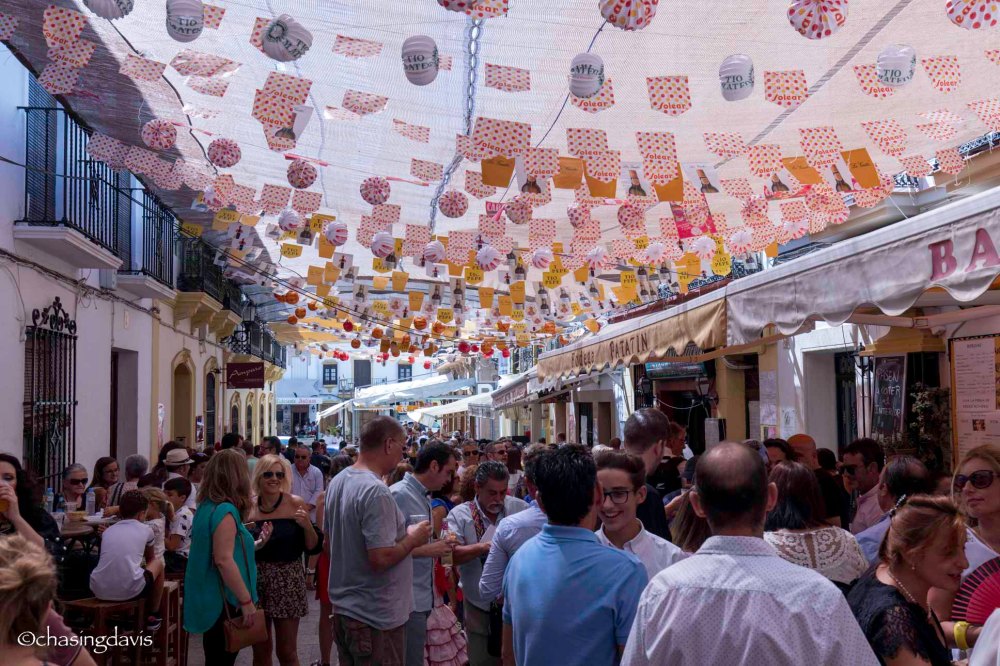 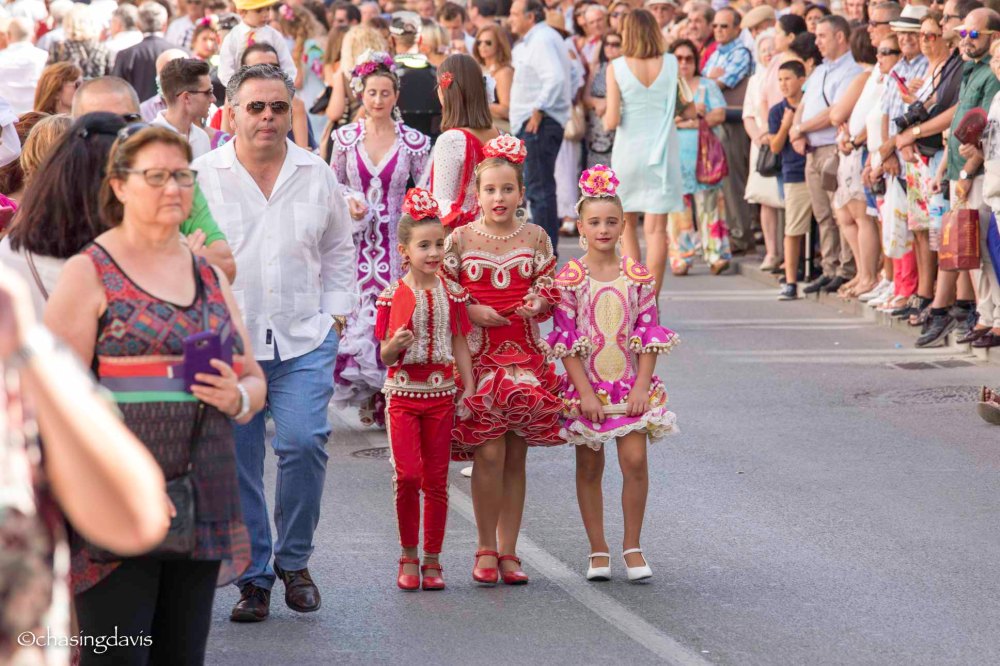 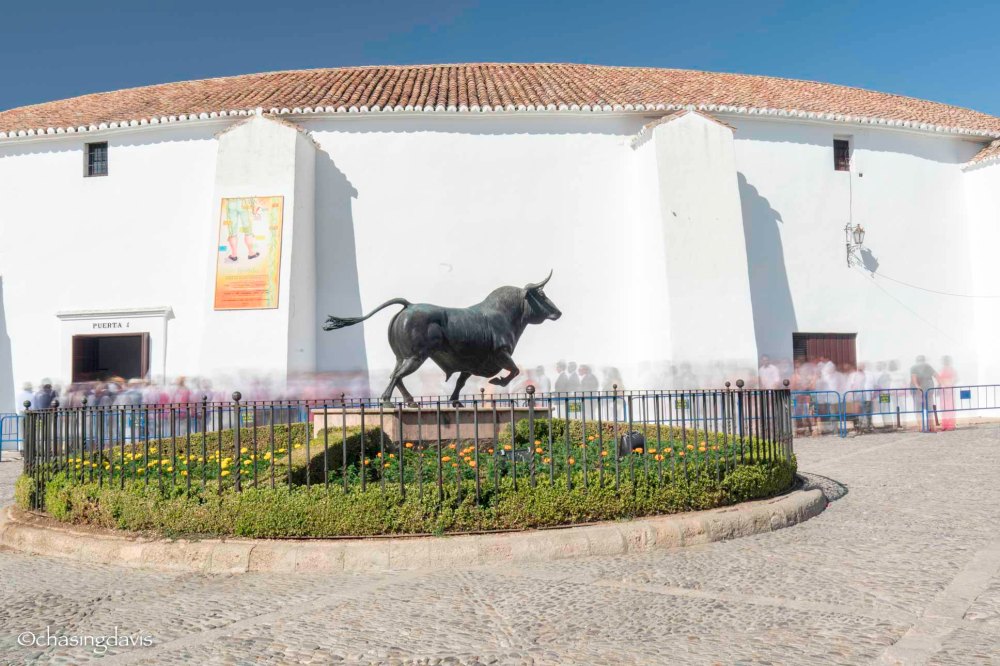 After the excitement of the bull fight, we headed to the old part of town to see the famous Punto Nuevo Bridge spanning the river Tejo below. According to legend, during the Spanish civil war prisoners were thrown to their deaths off the bridge. A story perhaps embellished by Hemingway in For Whom the Bell Tolls.

After a week of bouncing around Portugal and Spain we were tuckered out, so our last day in Spain was a relaxing one before we flew out late Sunday night. We stayed at the lovely hotel Molino Del Santo just outside Ronda and they graciously allowed us to have the room all day. We had some nice relaxing time by the pool and then went on a hike to the Boca del Gato cave, which was nice (and reminded us of our furry feline at home). 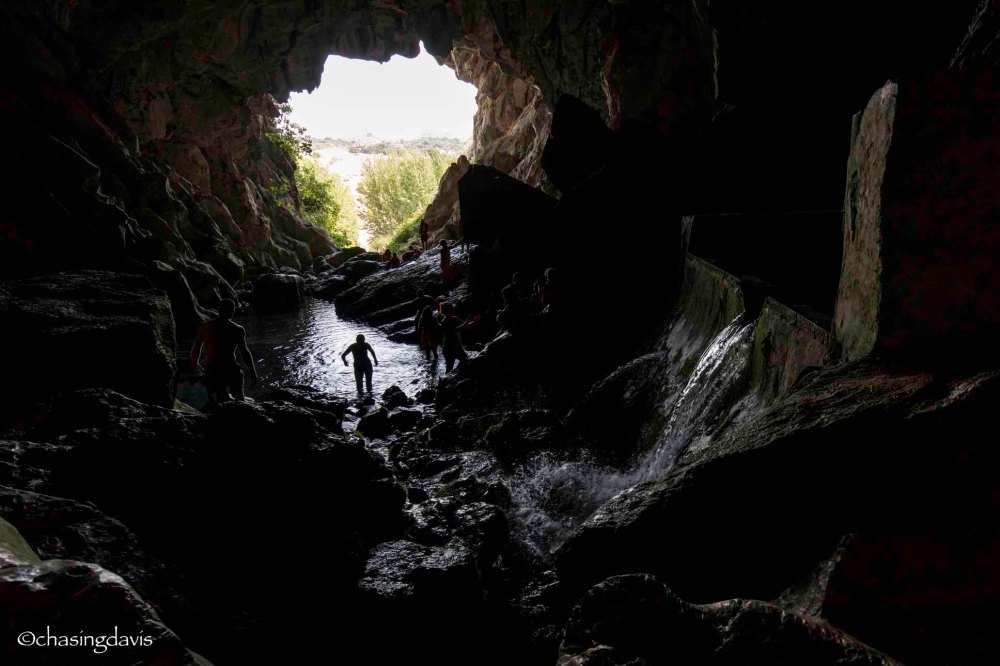 Part of the afternoon festivities was drinking sangria and watching our friend, Drew, race cars – really fast – on the Pirelli World Challenge. In parallel, there was the Irish hurling championship between Galway and Waterford. Galway won for the first time since 1988! For those who don’t know anything about hurling, watch this video… the sport is a combination of soccer, rugby, and lacrosse and is super faced paced.

We had a late flight from Malaga to Dublin and arrived around 1:00 a.m. on Monday, just after the last bus and car rental office closed. As a result, we found a comfortable, dark, and quite place to lie down in the terminal and “slept” until the first bus left at 6:00 a.m. to Galway – not recommended. The airport did supply a good wake up call around 4:00 a.m. with all of the lights and music abruptly coming on – how nice of them!

The day we returned, there was a huge celebration for the Galway Hurlers!  They won the championship to become the ALL IRELAND CHAMPIONS!!  I think everyone in Galway was there! When in Rome, Right?!