At the end of August, Kelley and I took a week long trip to Portugal and Spain. Our first stop was Lisbon, Portugal, which is one of the oldest continuously inhabited cities in Western Europe. In 1,200 BC Phoenician’s settled there, then it was ruled by the Romans, Germans, and Arabs (Moors) before 1147 when Portuguese crusaders finally conquered it. Kelley and I were not sure what to expect and were delighted to find a beautiful city with a mix of old and new shabby-chic decor of cobbled alleyways, colourful pastel buildings, graffiti and street art, open-air bars and restaurants, and most importantly delicious and inexpensive food. 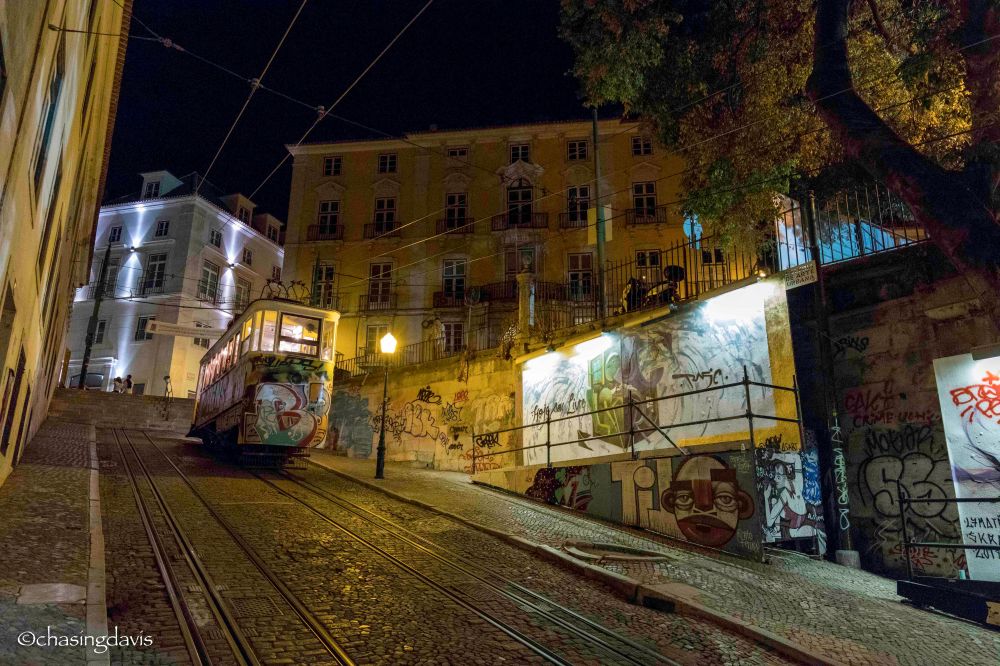 Our first day, we took the train to Sintra, a picture perfect (and touristy) town dotted with luscious gardens and whimsical pastel palaces, nestled into the hills that roll down to the Atlantic. All of the guidebooks, tell you to get here early to avoid the tourist throngs but alas we got a slow start to the day (I wanted to find some pastries) and arrived around noon…. along with everyone else (#facepalm).

It seems that everything in Portugal is situated at the top of a hill so after eating lunch (of amazingly delicious tapas) we got a taxi to the Pena Palace situated at the top of the hill. The current incarnation of the palace was completed in the mid-19th century and is a fine example of Romanesque architecture (whatever that means). 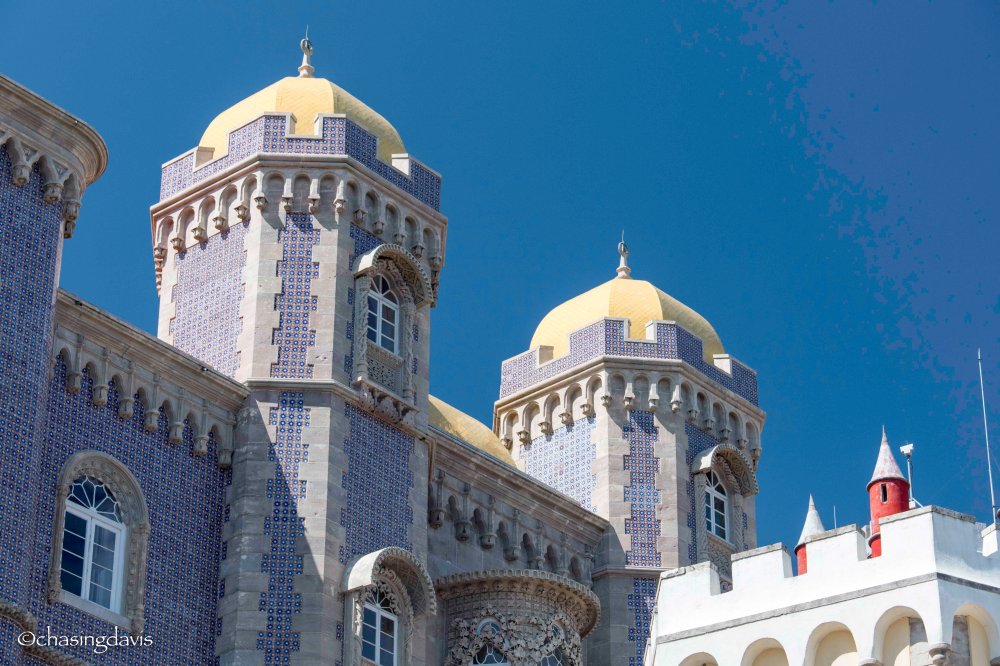 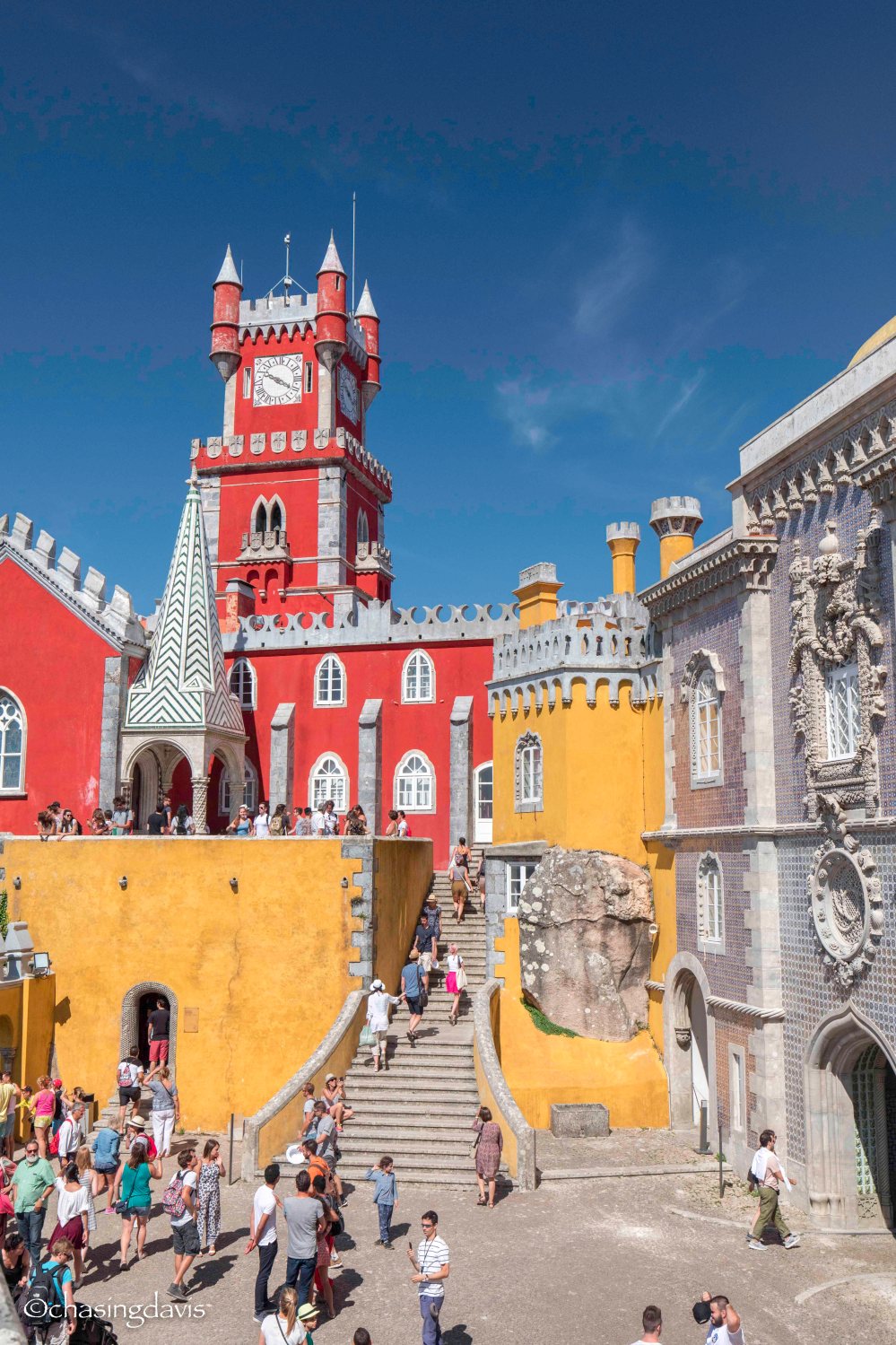 After exploring the castle, we walked through the massive hillside gardens to the high cross, which afforded some expansive views – well worth it. 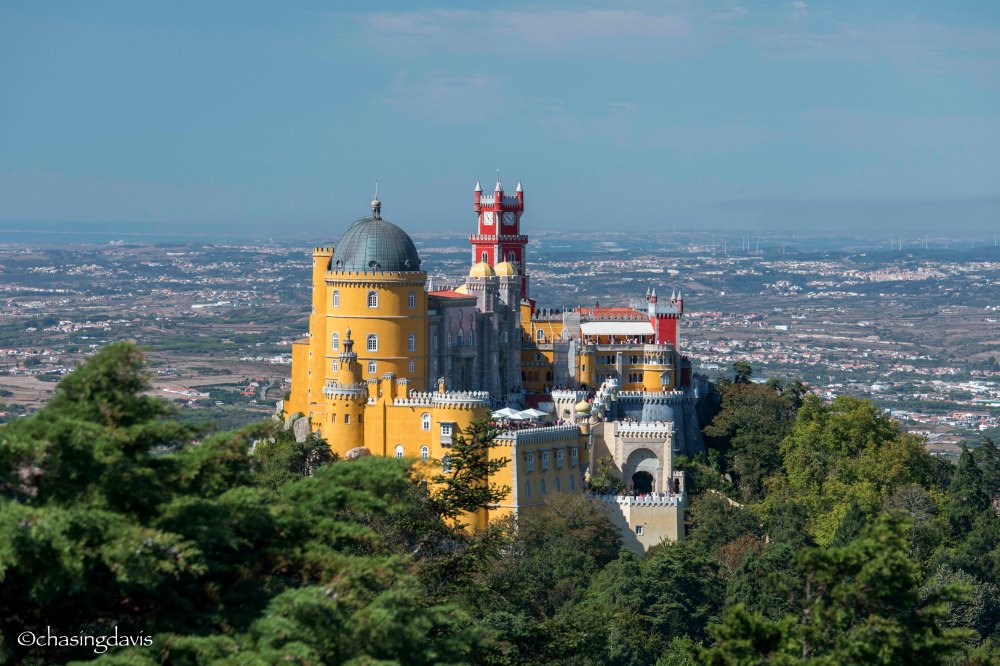 After a delightful hike through the gardens we walked to the Moorish Castle and then to the Sintra train station for our ride back to Lisbon. 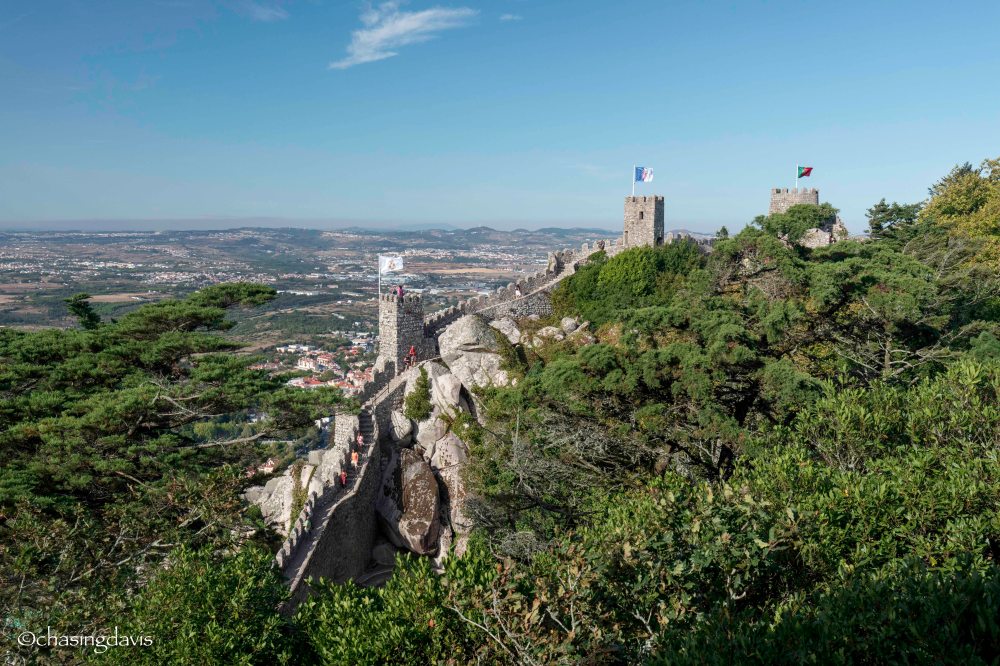 The next day we explored Lisbon, walking up and down its seven steep San Francisco-esque hills and through its cobbled alleyways. 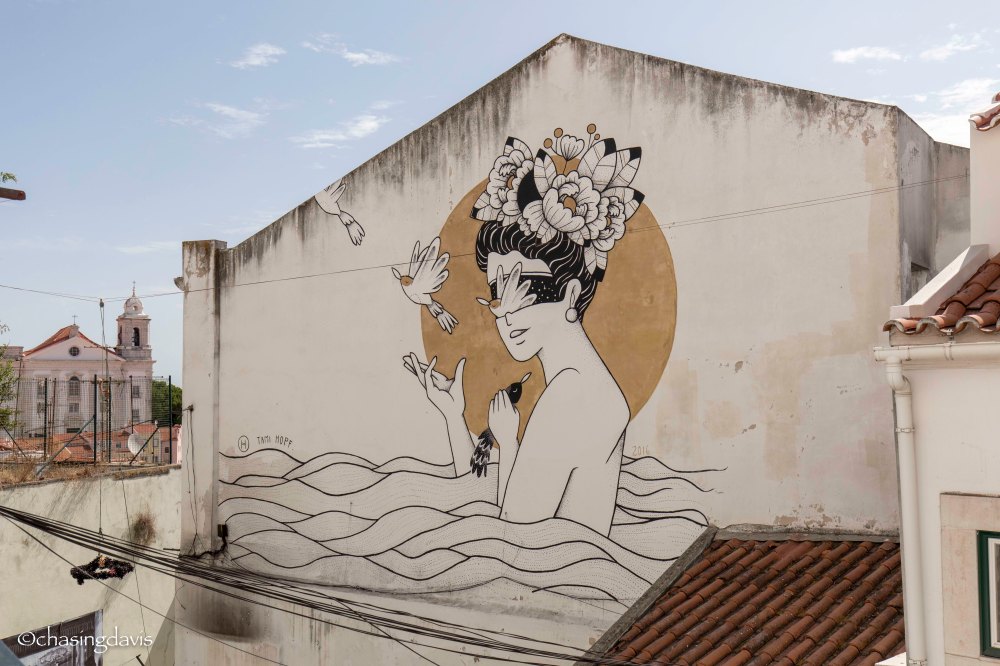 Just after lunch we stumbled upon Time Out Market Lisboa and were in seventh-heaven. Our friends, Martin and Theo, told us about it but it did not fully register how amazing it would be… we only ate there once but it was memorable! The market is wall-to-wall with food and drink stalls – like a grown-up cafeteria full of incredibly delicious food! The Portuguese love food, so the stalls are filled with regional delicacies, local produce, and selections from some of the best restaurants in town. So delicious!….did we mention how delicious it was? One of our favourite treats was Pastel de Nata, a custard tart that is addictive – I had about 6 the first day we discovered them (and then 3-6 on each subsequent day). 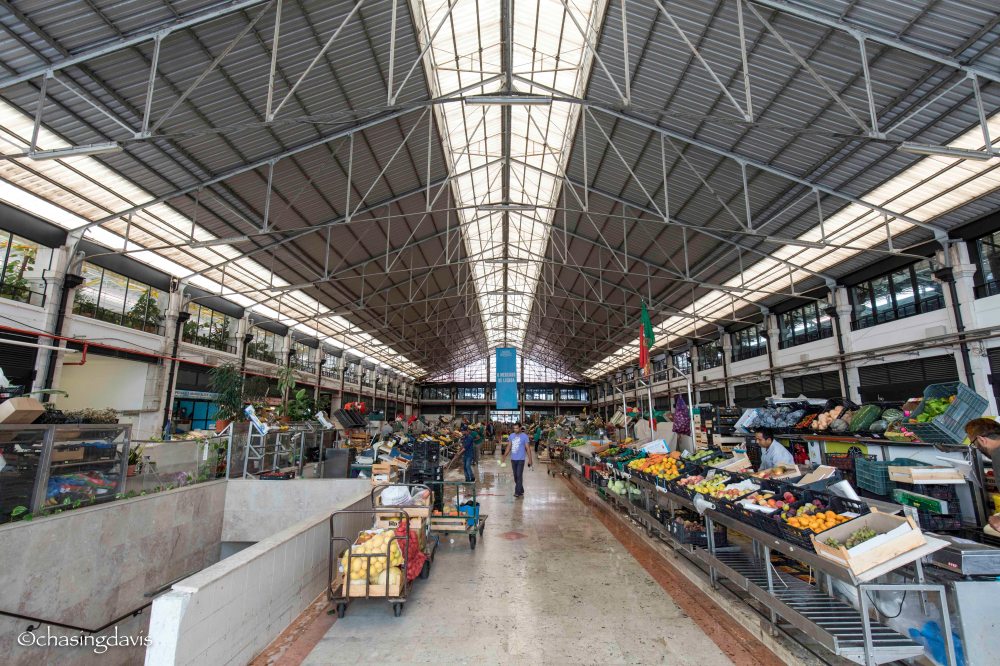 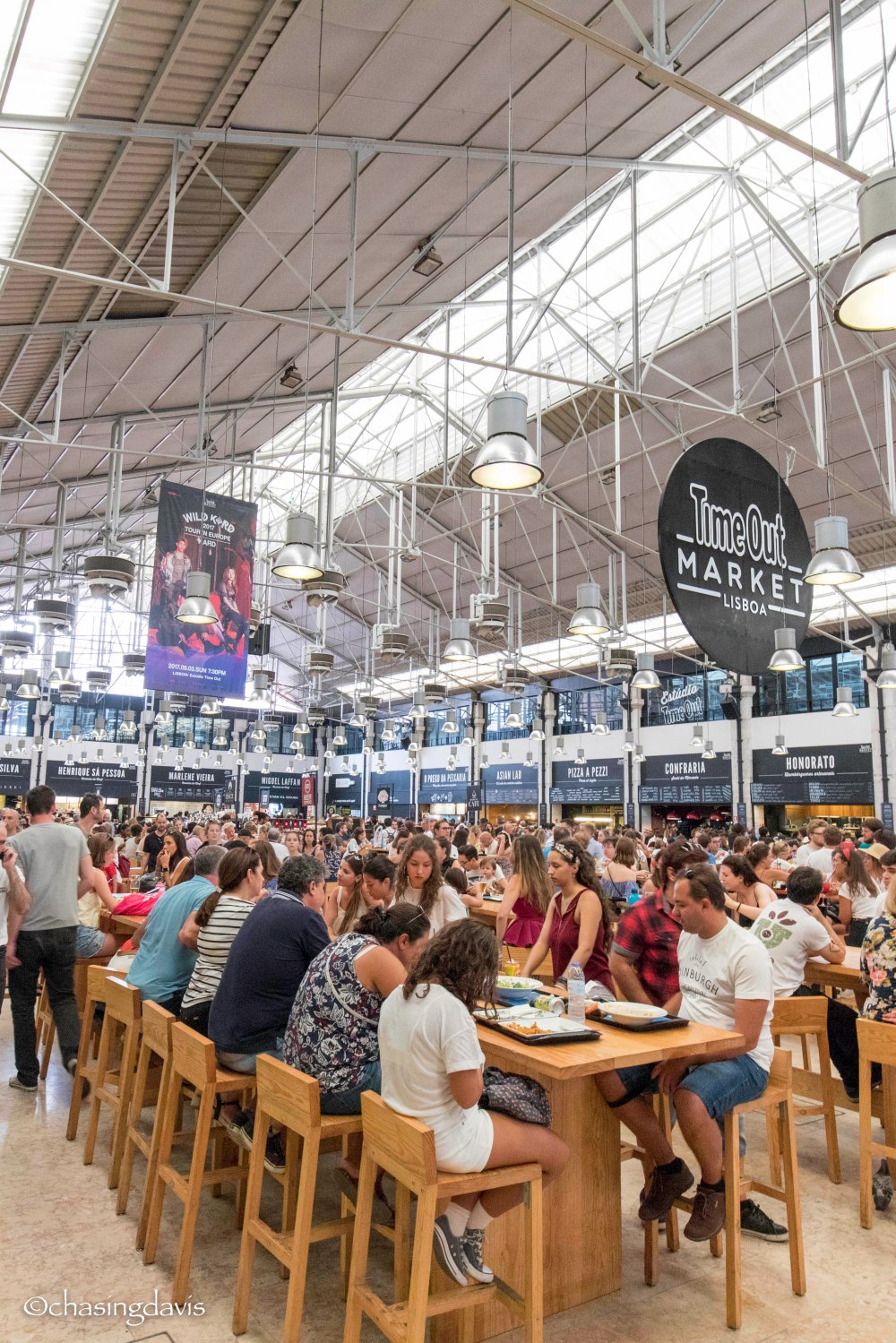 After entering a food induced coma, we headed to Padrão dos Descobrimentos (Monument of the Discoveries) a monument that celebrates the Portuguese Age of Discovery because after all the Portuguese are a seafaring people. 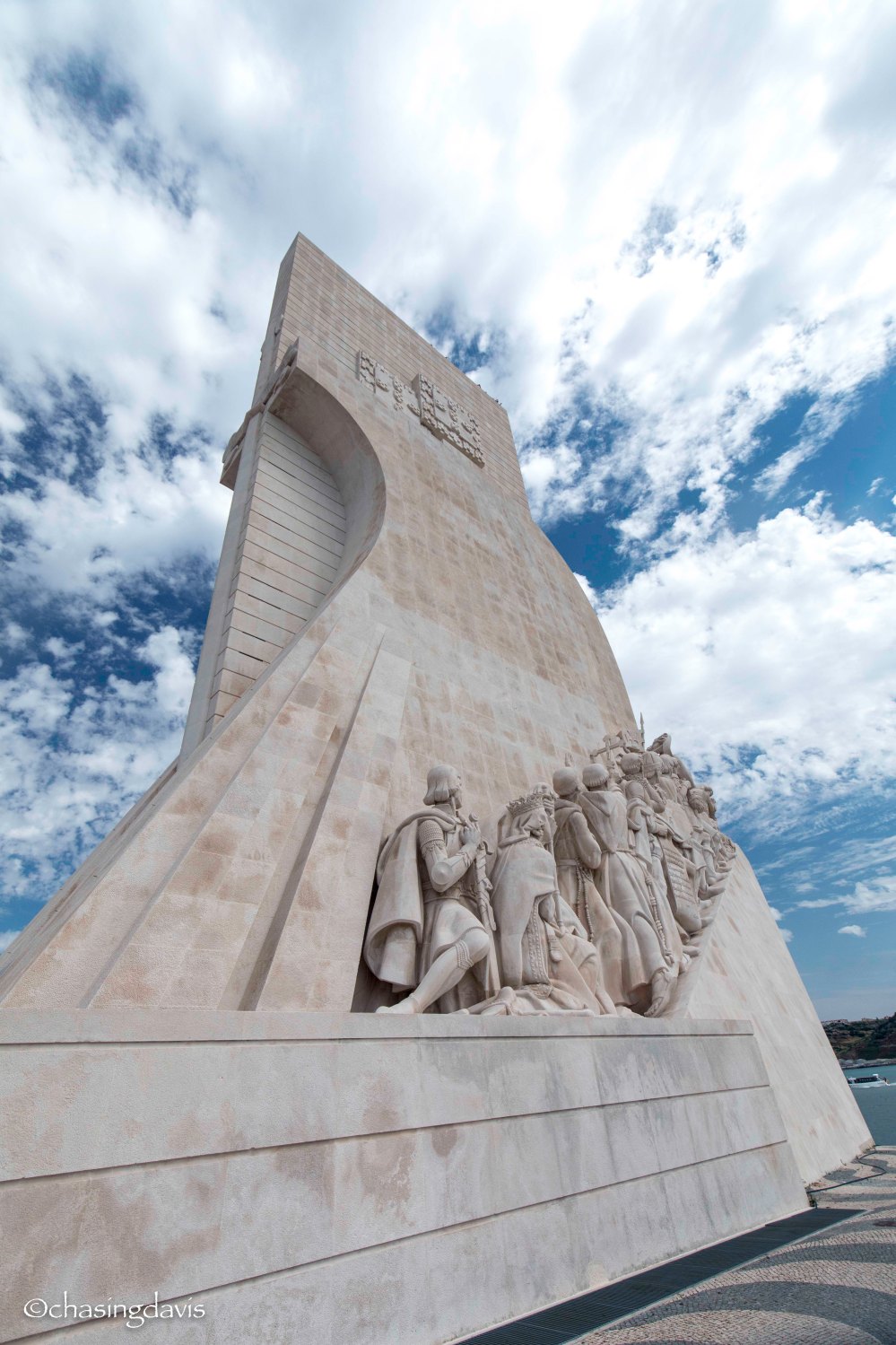 After three days of city life full of walking and digesting, I insisted we needed some R&R, so we headed to Lagos along the southern Algarve coast. (Kelley:…..thats Matt being funny…..of course HE didn’t insist on the R&R…..) 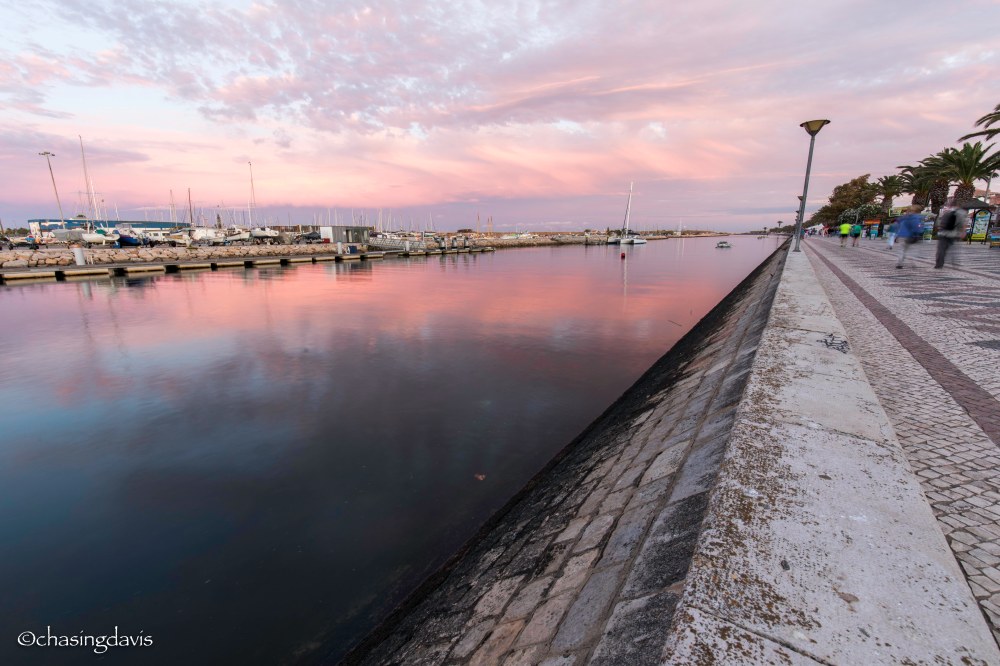 Lagos is a bit of a party town and not quite our vibe, so we rented a car and traveled to Fortaleza de Sagres. We decided to just have a quick look from the cliffs… the water was beautiful and the waves were dotted with eager surfers but our eyes were set on a more secluded beach.

Hopping back into the car we traveled further north to Praia de Cordoama and this is where we really went BIG!  We splurged on the beach chairs and settled in for the long-haul of reading, resting, and relaxing.  It was glorious!  I started to question what I had been doing my whole life and questioning how’d I’d gotten this far in life without regularly spending a day (or two….but lets not get too excited) in deep relaxation….I have since vowed to my wonderful wife that we should relax more often! (Kelley:  you may also guess, Matt did not write that….but he embraced the day with love, a few photo walks, and even some relaxing)