Due to some technical difficulties….I have a few Ghana posts left to post!

About a month ago, I found myself back in Kumasi for a weekend and a group of us from PPB decided to check out Cape Coast!  Based on the less than relaxing experience we had at Labadi Beach in Accra, I was slightly skeptical about Cape Coast but it seemed worthy of exploring.

We had a full car for the adventure: myself, Pascal, Obed, Frank (production manager at the factory), and Martin (factory engineer visiting from the US).  We set our alarms for an early morning departure…and left an hour after we planned, so right on time by Ghanaian standards.

Frank estimated the drive would take 2-2.5 hours….not bad….right?  Well, after four hours of potholes and over-taking questionably loaded semis on a two lane “highway”, we arrived  in Elmina, just outside of Cape Coast.  (Although looking at the map’s estimate, I guess we made good time).   We booked a dorm room for the 5 of us at a cute, laid back beach inn called Stumble Inn.  It’s tucked in up the coast a little ways outside of Cape Coast so we had a clean and secluded beach all to ourselves.  It was just what the doctor ordered.

We settled in quickly and after seeing the extensive and CHEAP cocktail menu, we decided to forgo further exploring for the day and enjoy some well-deserved R&R.  The remainder of the afternoon was dedicated to cocktails for 10 cedi ($2.50), a clean open beach, and warm waters!  We played in the waves and enjoyed the sun the rest of the day.  When the evening rolled around, the staff came to take our dinner order so they could go to town and buy FRESH seafood.  We all opted for the lobster, which was delicious! 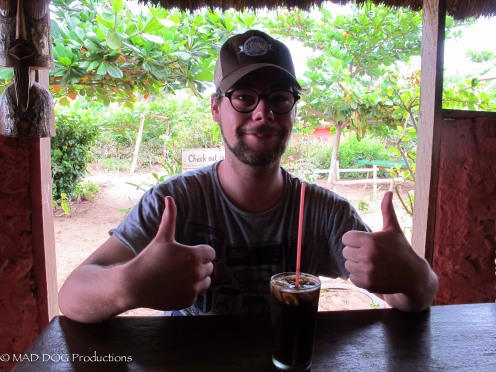 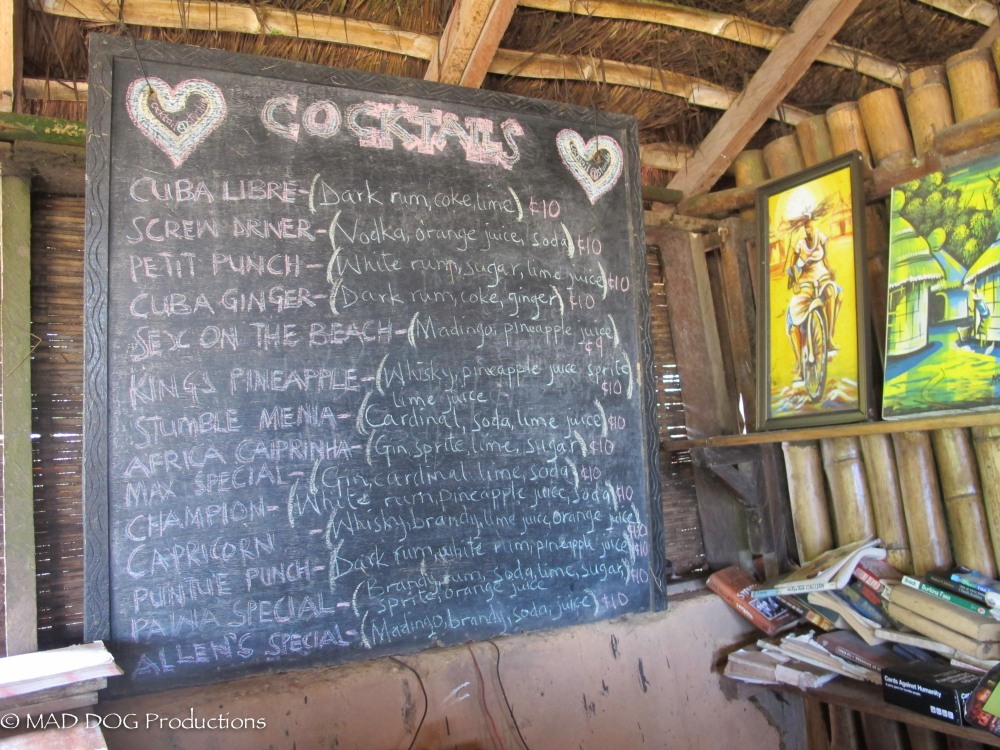 It wouldn’t be fair if I left out the guys’ efforts to impress the young ladies who they eventually learned were only 18 years old (legal, yes…..ethical, no)…..it came as a slightly painful realization that most of us were nearly twice their age…..ouch.  In the evening, we enjoyed a bon fire on the beach and clear skies made for nice star gazing. 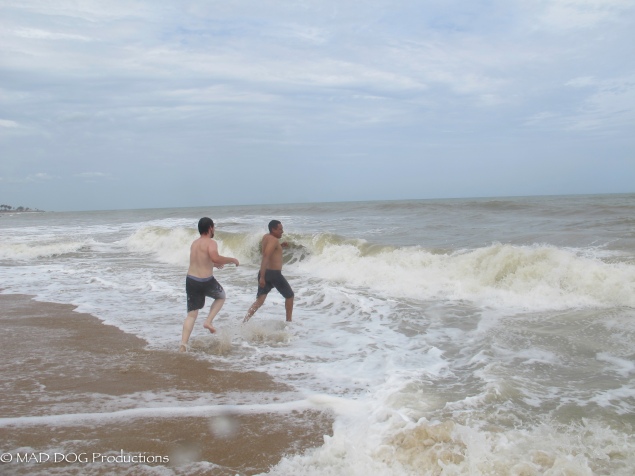 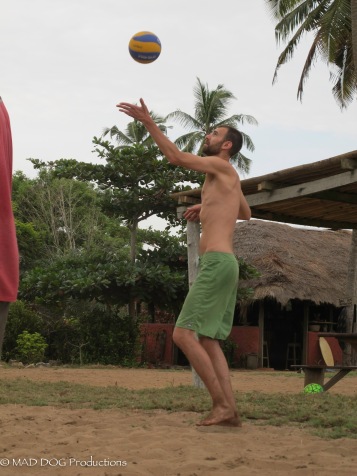 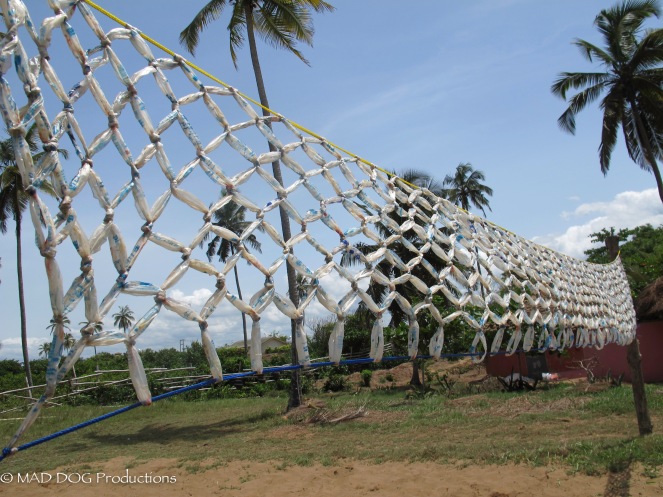 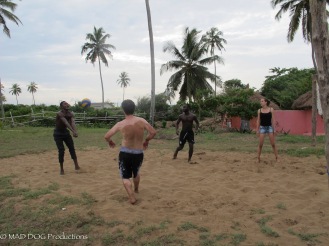 On Sunday, we drove into the town of Cape Coast.  Cape Coast played an instrumental role in the trade of goods and eventually slaves from Africa.  Due to its rich trade opportunities, the land and forts (“castles”) changed hands several times since the 16th century.  Countries laying claim to the forts included Britain, Portugal, Sweden, Holland, and Denmark.  We decided to visit Cape Coast Castle, a significant and well preserved slave export fort along the Ghanaian coast (#UNESCO!….the not-so-secret nerd in me LOVES UNESCO World Heritage Sites).

Obed and I took a very moving tour of the castle.  It started with a walk down a dark passage into the Male Slave Dungeon.  The darkness and uncertainty of what was ahead gave me chills and a slight desire to turn back.  Around a corner, though, the tour guide turned on a light which lit the four dark rooms where male slaves were kept.  Slaves remained in these rooms for weeks to months at a time, awaiting an uncertain fait through the “Door of No Return”.  The guide described the conditions; dark, crowded, bodies, and human waste…sometimes inches to feet deep.  The only natural light for the rooms came from small holes near the ceiling, otherwise there was complete darkness.  The dungeons rooms led to an alter and a room of gifts and offerings left by visitors over the years….including the Obamas! 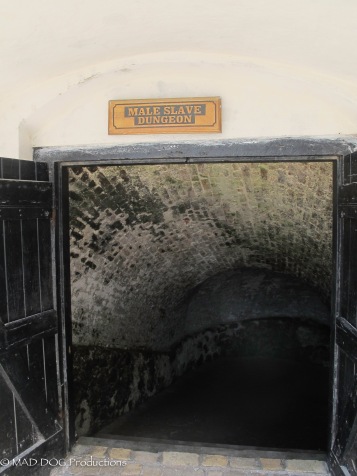 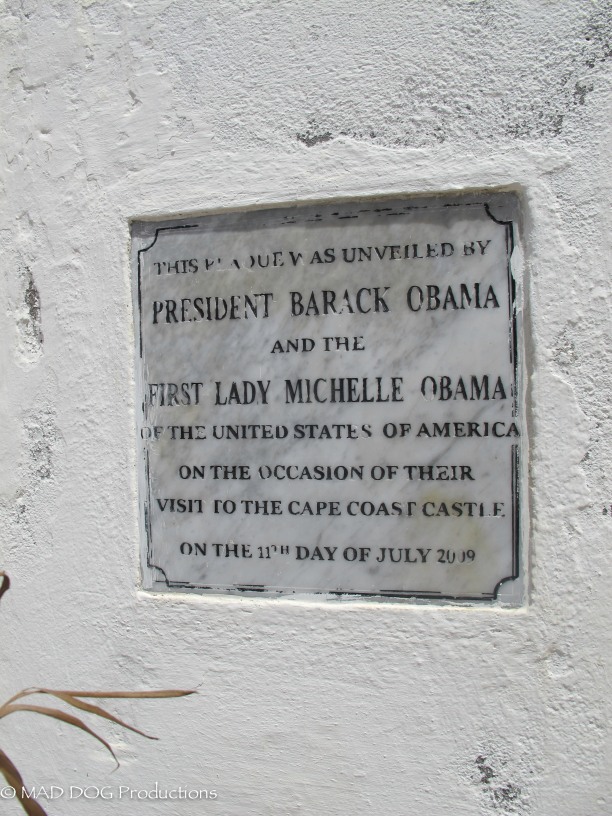 From the male dungeon, we proceeded across the grounds.  We learned about the fortification and protection of the fort and about the people who helped run the fort and slave trade. 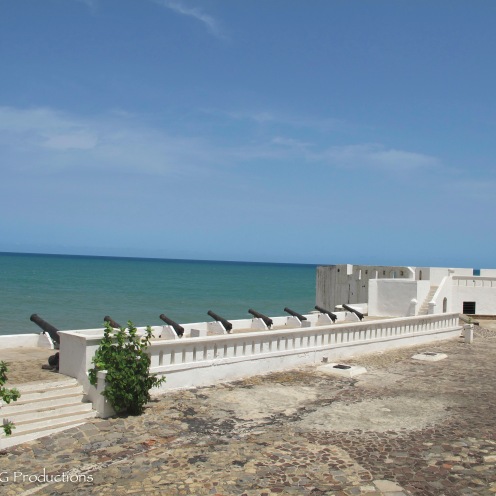 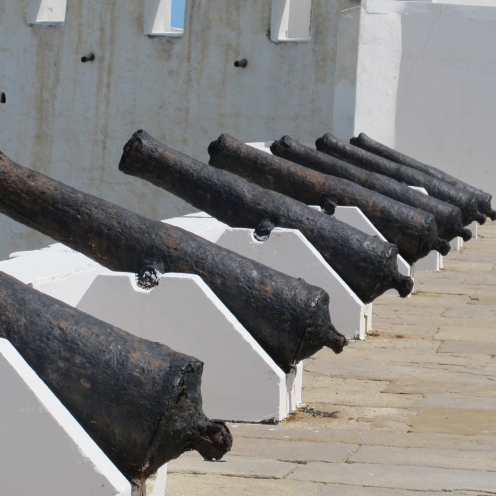 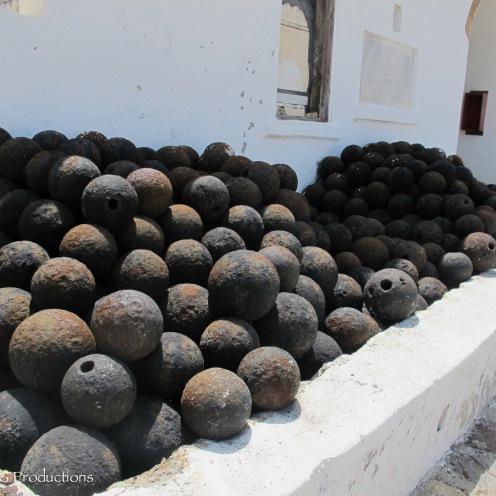 Next stop was the Female (and child) Slave Dungeon.  It was not as eerily tucked underground but appeared equally as oppressive.  The guide explained how the generals and leaders of the fort would take women as “lovers” and if the woman became pregnant with the white-man’s baby, she would be released. 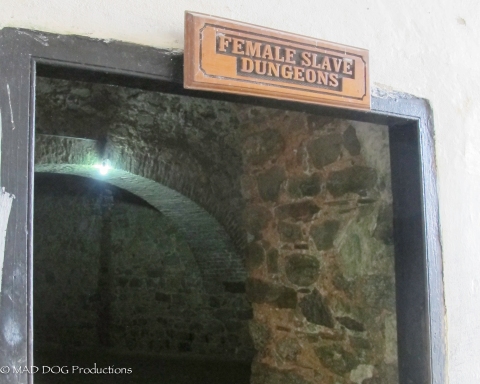 All slaves leaving the fort would exit through the “Door of No Return”.  I can’t quite understand why an “Akwaaba” Sign (“Welcome”) was also next to the exit door…..

Outside awaits the ocean and dock for boats (now used for fishing boats).  The opposite side of the door is posted “The Door of Return” for men returning with boats for more slaves…..they could have at least put the Welcome sign out there…. 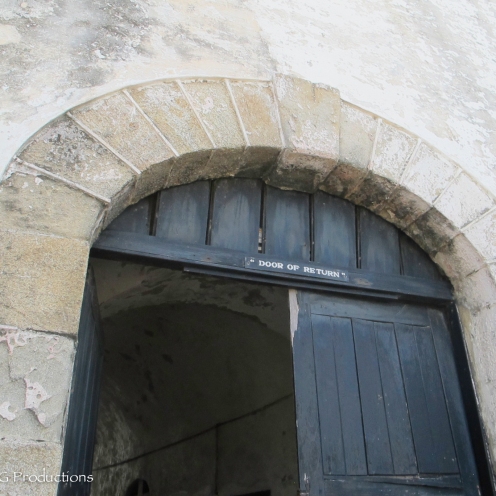 The tour proceeded to the cell, where the most aggressive slaves were kept, often until they died.  They were kept here for extended periods of time, if one slave died they often waited until they all died to clear out the bodies.  There are marking on the walls and floor from people grinding with their shackles.  The room was essentially a cave with the least amount of light and very little space. 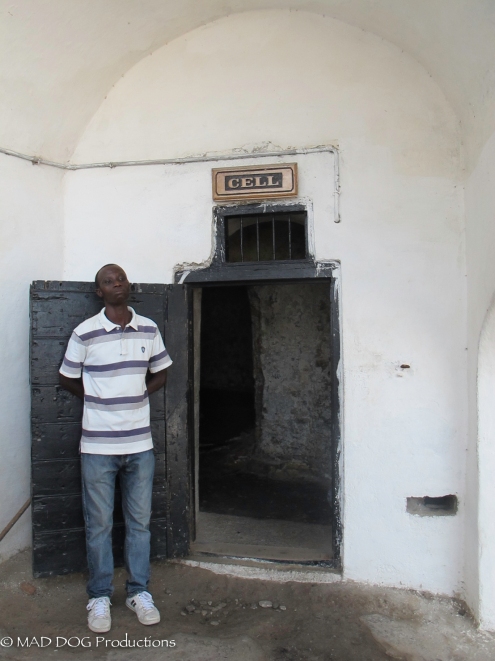 The tour concluded in the upper levels of the fort where the slave traders met and lived. 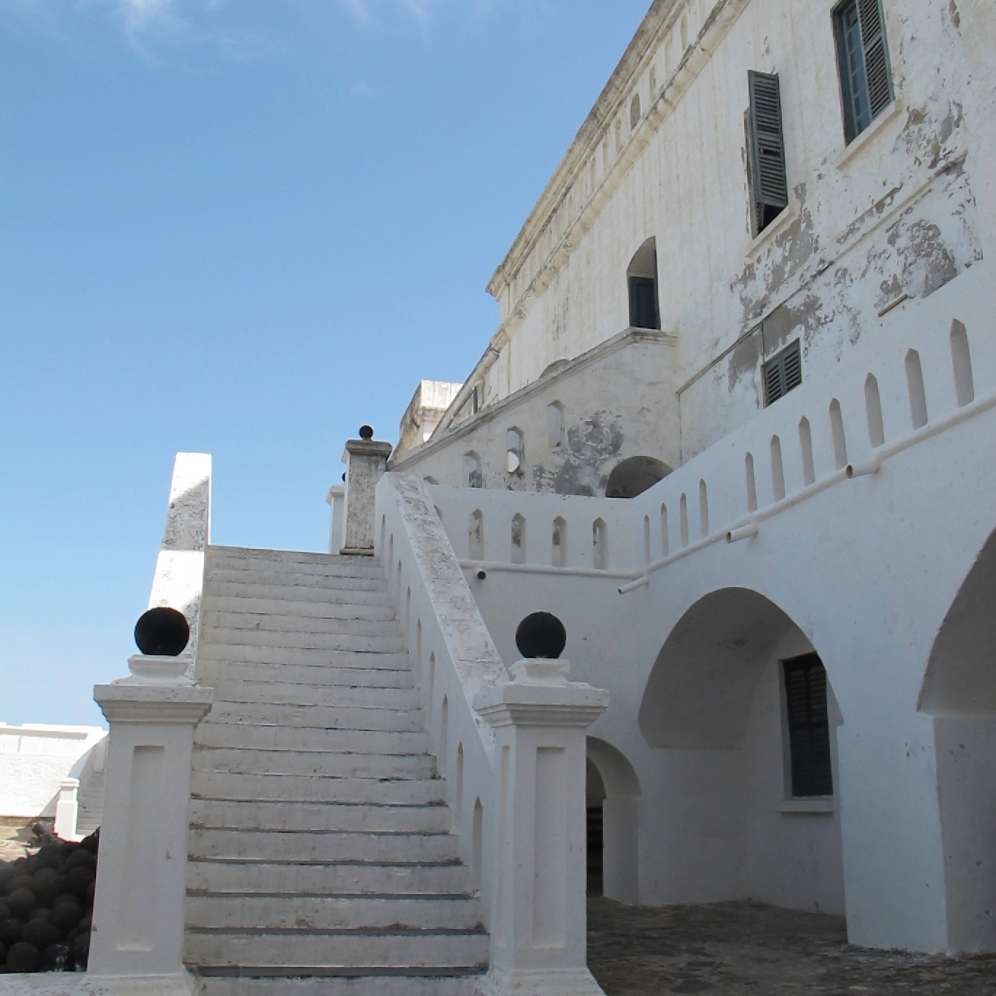 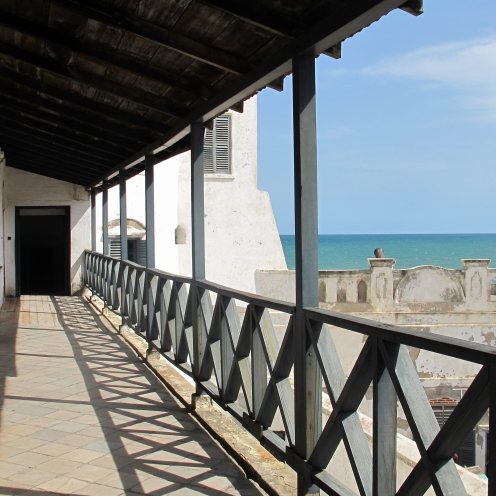 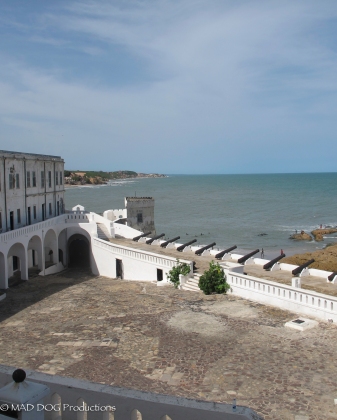 Although incredibly sad, I enjoyed the tour and learning A LOT more about the history of trade and slavery in Africa.  It is incredibly difficult to believe this was all in such recent history and the magnitude and impact it had on Africa and the Americas/Europe.

After the tour, we enjoyed lunch at the beach and enjoyed the bumpy drive back the Kumasi.