As many of you know I have a passion for exploring canyons, whether it be on foot, kayak, or in a raft… I looked back at my past trip reports and I have explored over 300 canyons! Canyons have a special place in my heart because there is so much variation and you feel like you are going back in time as you plunge thru the different rock strata.

Over the past few weeks I have been focused on exploring the canyons around the Dead Sea before the summer heat renders that impractical. In Israel they are called wadis (Arbic for valley) or nahals (stream in Hebrew) or ein (Hebrew for spring) and they have a similar character to many of the canyons I explored in the Western US but mainly those in the Colorado river basin. If you recall the Dead Sea is part of the great Rift Valley which stretches from Ethiopia to Syria! The elevation of the Dead Sea is -1,407 feet (-427 meters) and the Judean Plateau rises from ~ sea level to + 3,280 feet (1000 meters) at the mountain peaks. As a result the elevation change from the plateau to the Dead Sea is profound and has carved some fantastic canyons.

The first canyon I explored was by accident. I was visiting Qumran and just happened to see people rappelling in a canyon that bisects the archeological site. If you are unfamiliar, Qumran is the site where the Dead Sea scrolls were found. What are the Dead Sea scrolls Matt? Well in a nutshell these scrolls are the oldest known manuscripts of the Hebrew Bible (i.e. the Old Testament) including test that didn’t make it into the Bible and descriptions of life in Judea around the time of Jesus. It was accidentally found at Qumran in 1947 inside clay jars hidden in a cliffside cave by a Bedouin shepherd boy searching for a stray goat. The story goes, that the shepherd was throwing rocks and upon impact the rock shattered a hidden clay jar. About 950 different pieces of parchment and papyrus scrolls written between 200 BCE to 68 CE were found in 11 caves in the area. The scrolls are not on display at this site but at the Israel Museum in Jerusalem but they have recently been digitized thanks to our amigos at Google and the Israel Museum: http://dss.collections.imj.org.il/. 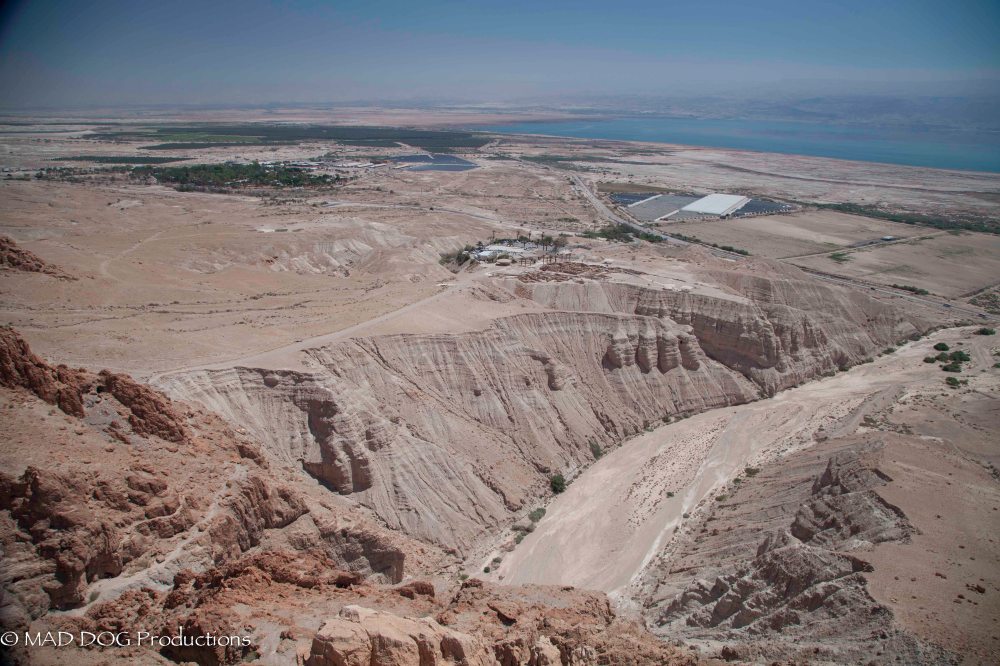 After exploring the archeological site, I spotted the people rappelling in the canyon and went closer to investigate… 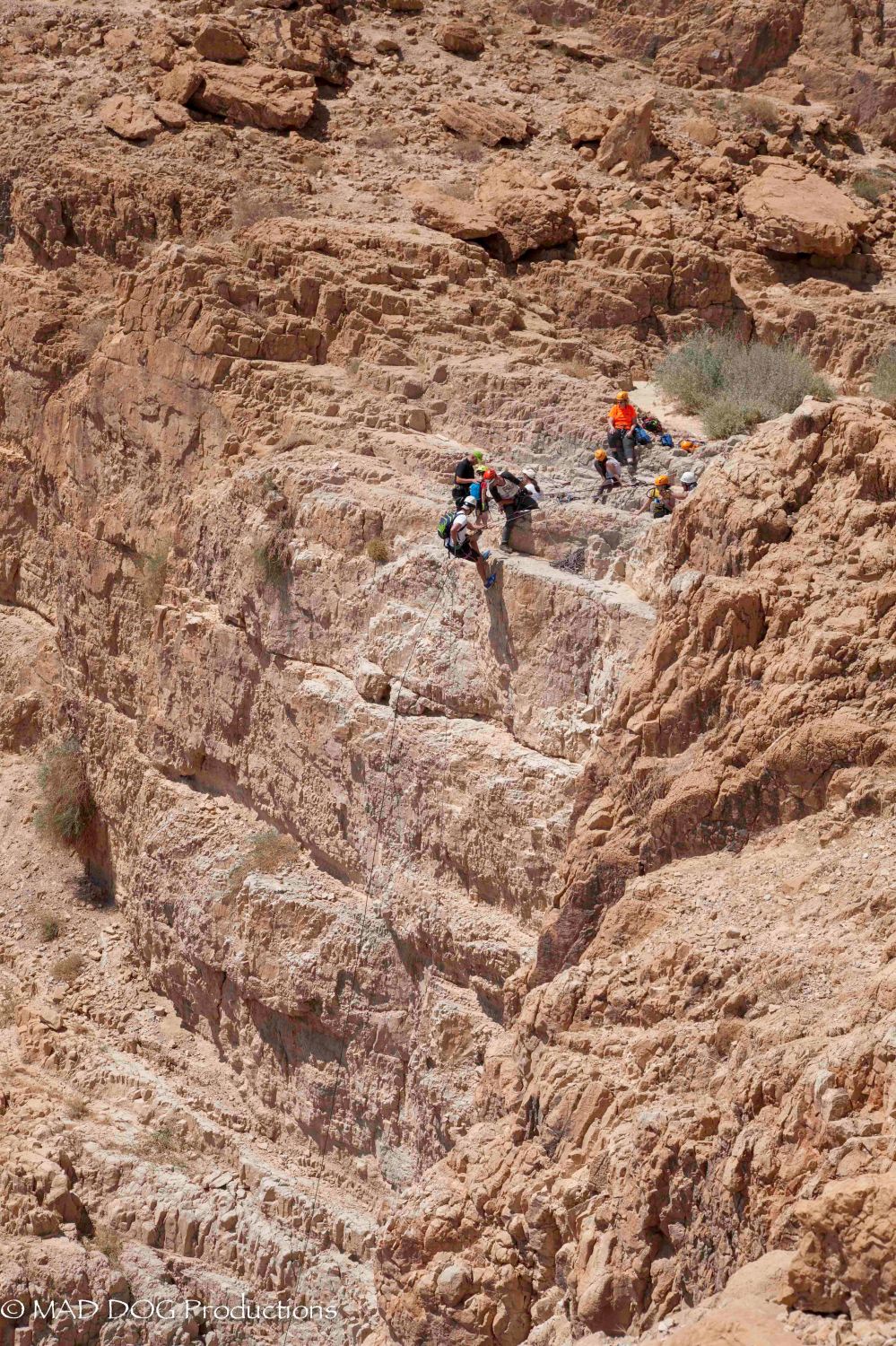 There were probably 30-40 people rappelling down the canyon’s 8 dry waterfalls, which brought back memories of Poly Escapes and shuttling inexperienced people down canyons far more remote than this one… What could go wrong??? After admiring the canyoneers for a few minutes I continued up the canyon to the Judean Plateau, where I had marvelous view of the Dead Sea. I would have gone further but I was in Chacos, had very limited water, and no food… What would Kelley do??? I should tattoo that on my arm…

Driving south from Qumran, I stumbled across: Wadi Salvadora. I had never heard about it before but there was a sign and it was positioned high above some nice looking Dead Sea beaches, more on that later… The hike started innocently by shimmying down a steep ladder into a narrow slot canyon of a sedimentary conglomerate rock… translation it looked like a house of cards and was about to crumble at any moment. 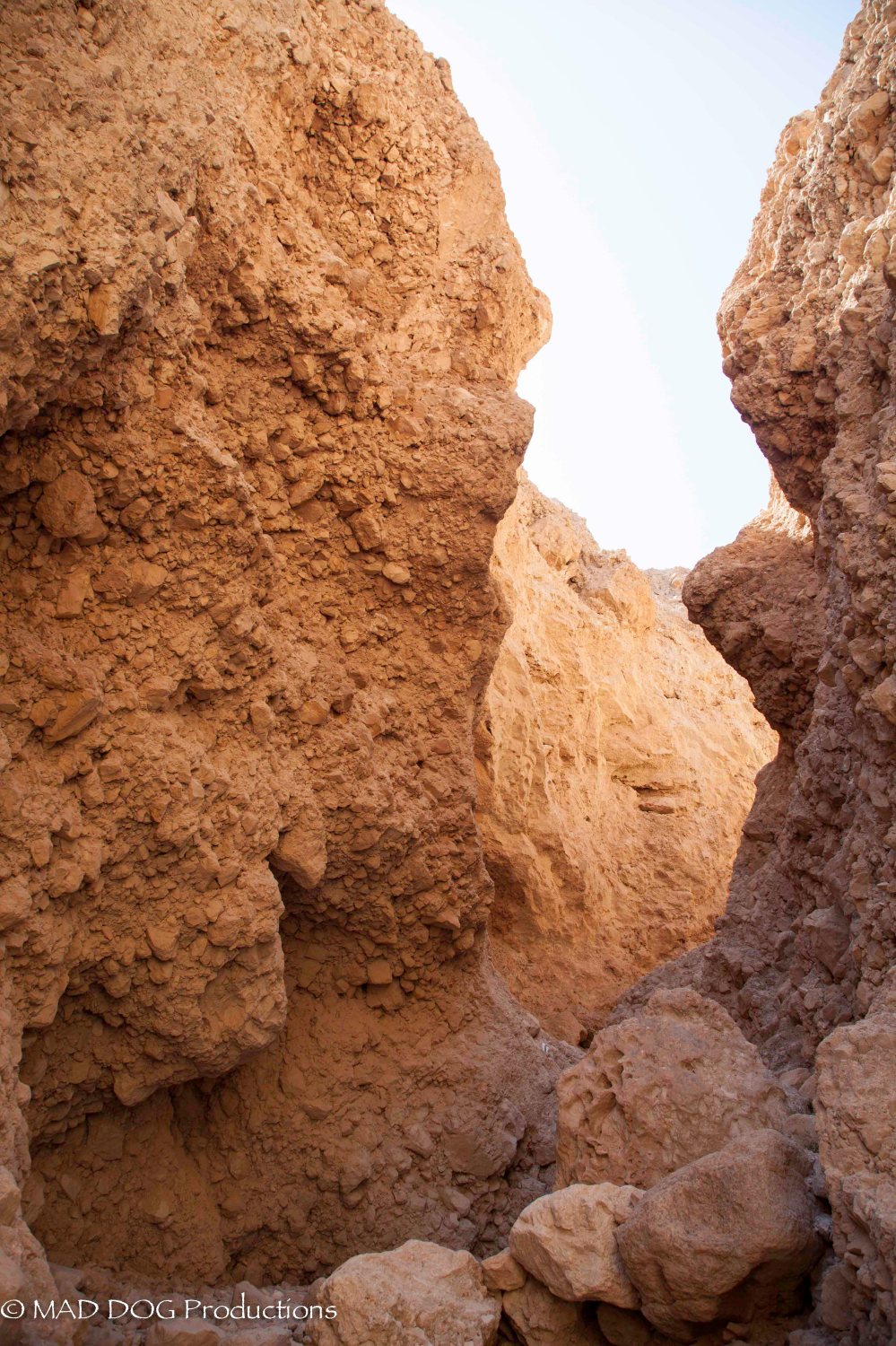 Did I mention it was hot??? It was over 100F and the sun was beating down on you like a jackhammer!!! So I was elated when I reached the end point of the trail and there was shade! Gloriously plentiful and ever so cool shade! It’s the little things! I was perfectly content and sat here for over an hour reading my book and writing in my journal. 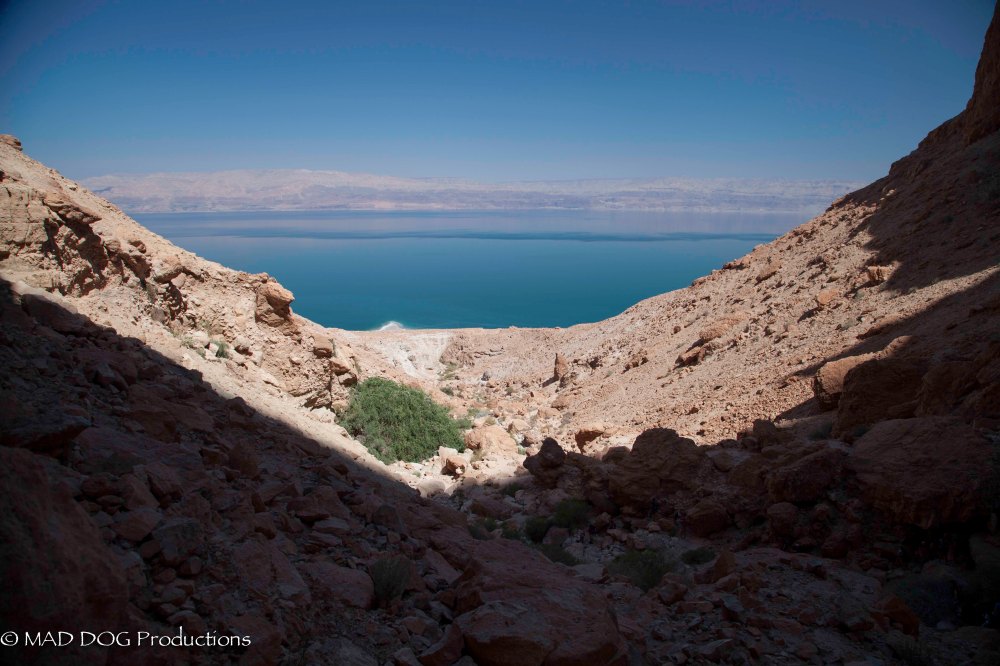 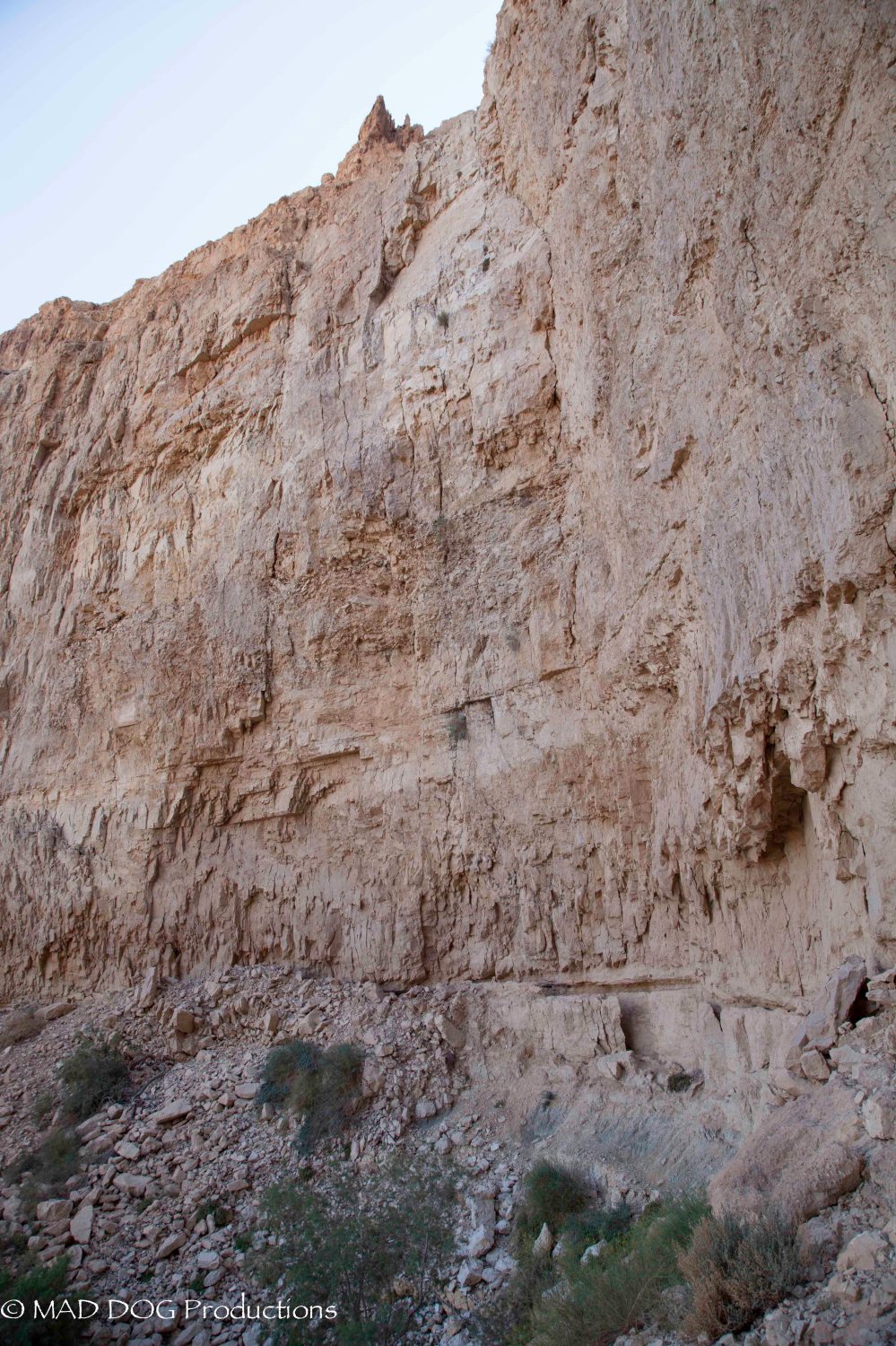 Canyons are especially important in the desert as they are meeting places for the numerous animals that call the desert home. As I sat in the shady grotto, I was enveloped in a symphony of bird song as they flew and dived overhead like Maverick and Goose in Top Gun. As I began my hike down I spotted some big horn sheep across the canyon, who were coming to drink in the canyon’s spring. 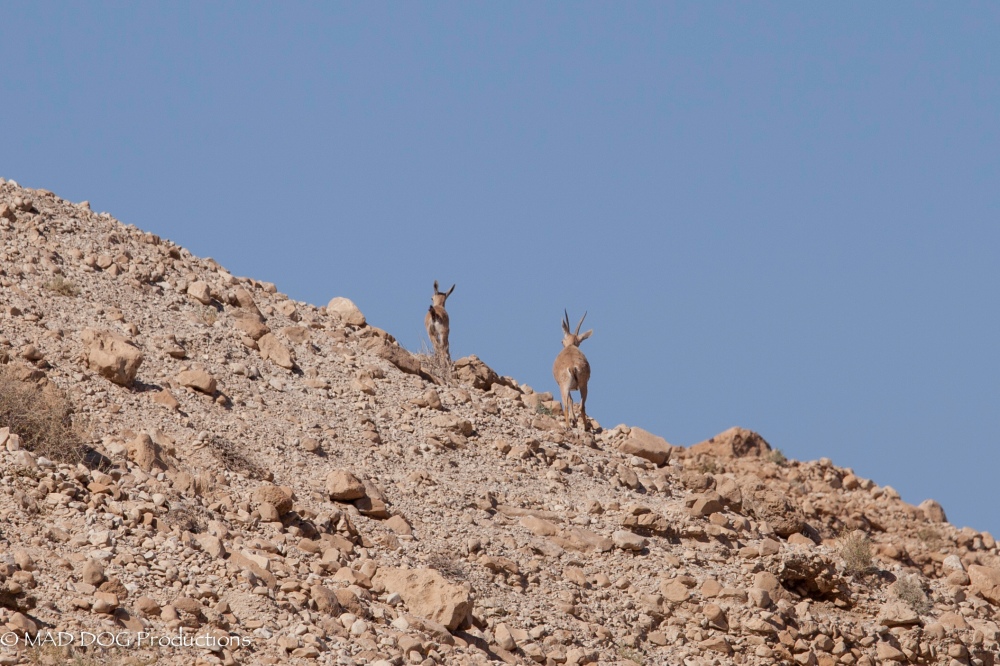 From the start of Wadi Salvadora, there is an incredible view of the Dead Sea…

I spied a lovely looking beach below, so I drove down to investigate… I discovered not only a great public beach but also hot springs!!! Mind blown!!! 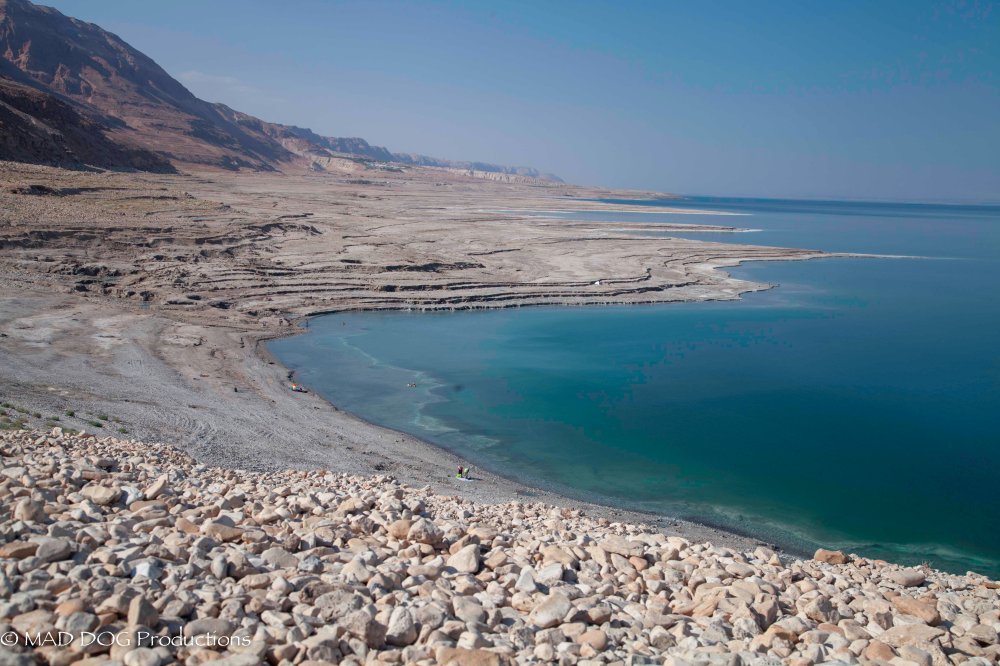 Unfortunately, I did not have a towel or else I would have hopped right in… Next time!

That evening, I camped in a huge dirt parking lot near Masada. It reminds me of “The Pit” in Bishop, without the dirty dirtbag climbers. I was pretty exhausted from a day of hiking and sweating in the sun and naturally excited to sleep… alas I was quite literally a hot mess and felt like I was in a convection oven the whole night… Yeah for Type III fun! 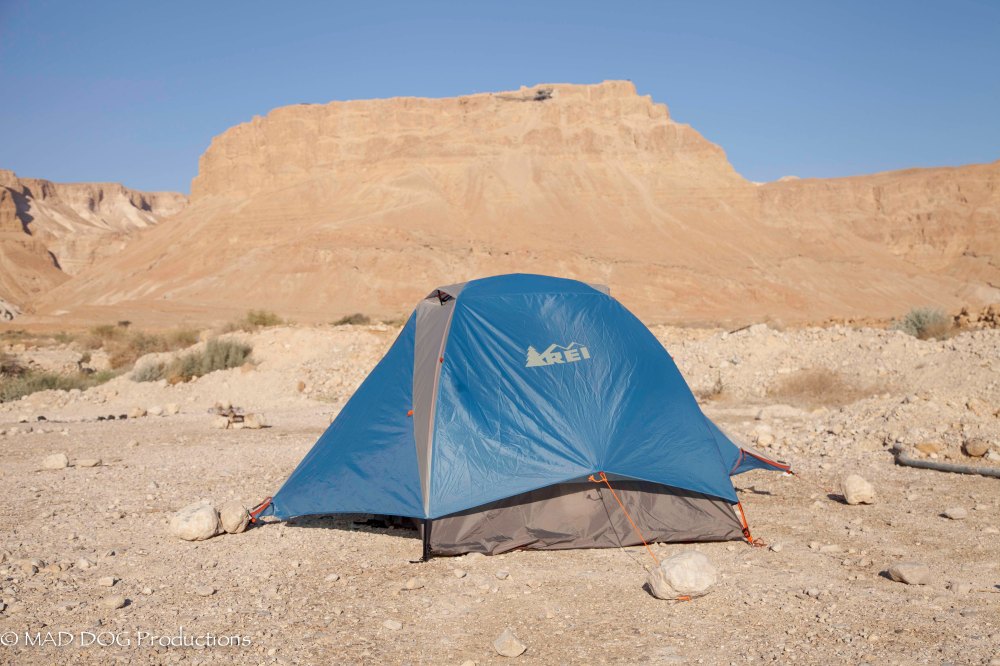 After less than superb night of sleep, I drove to the starting point to my next objective: Nahal Mishmar. I was originally going to complete the hike the previous day but was turned away by the ranger (yes there was a ranger) because it was too late in the afternoon. BORING!!! Upon arrival today, I was greeted by the same ranger asking where my map was… where my rope was… what trail I was going to take… how much food and water I had… Uhmm… why did you not tell me I needed all of this yesterday??? After several minutes of this interrogation and showing here I had plenty of water; a map loaded into my phone; food for 3 days; a first aid kit; an oh sh$% kit with iodine, 2 head lamps, emergency blanket, a small pharmacy, and a personal locator beacon; and my outdoor adventure CV, I was able to slip past her. Whew!

The hike starts up a broad (hot) valley with lots of beautiful purple wildflowers.

After an hour or so, it begins to narrow into a limestone (?) slot canyon reminiscent of the many others I have explored in the Grand Canyon. 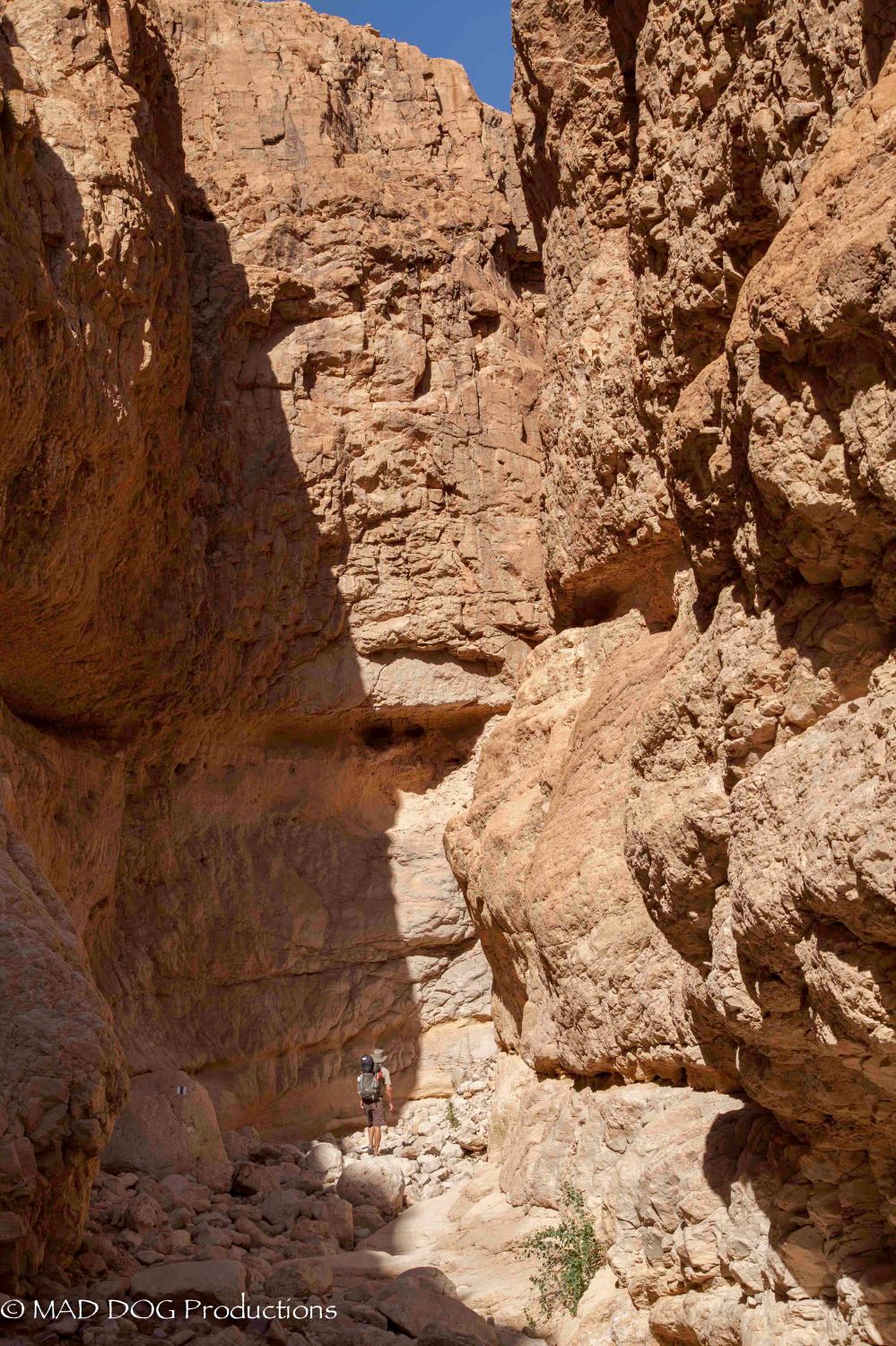 As you go further and further up the slot canyon there are a number of dry falls and stagnant pools of water to bypass. The dry fall was easy enough with this ladder that was installed. A little overkill in my opinion but nevertheless reassuring…

After dusting off the cobwebs of my climbing muscles, I was able to bypass the stagnant pool of smelly water by traversing on the right wall…

As you progress higher and higher in the canyon, the walls of the slot begin to drop away from around you as you enter a broad upper canyon (but still far below the Judean Plateau). 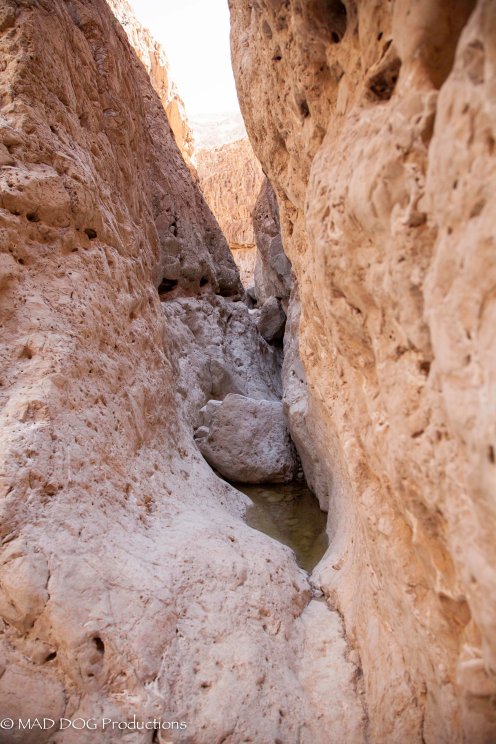 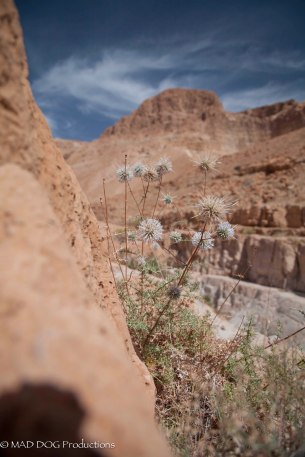 The Nahal Mishmar “ends” at this huge dry waterfall and a spring. Similar to Wadi Salvadora from the previous day, I rested here for about an hour listening to the bird song and relaxing in the rejuvenating cool air.

My energy levels replenished, I hiked back to a trail junction I noticed on the way up… 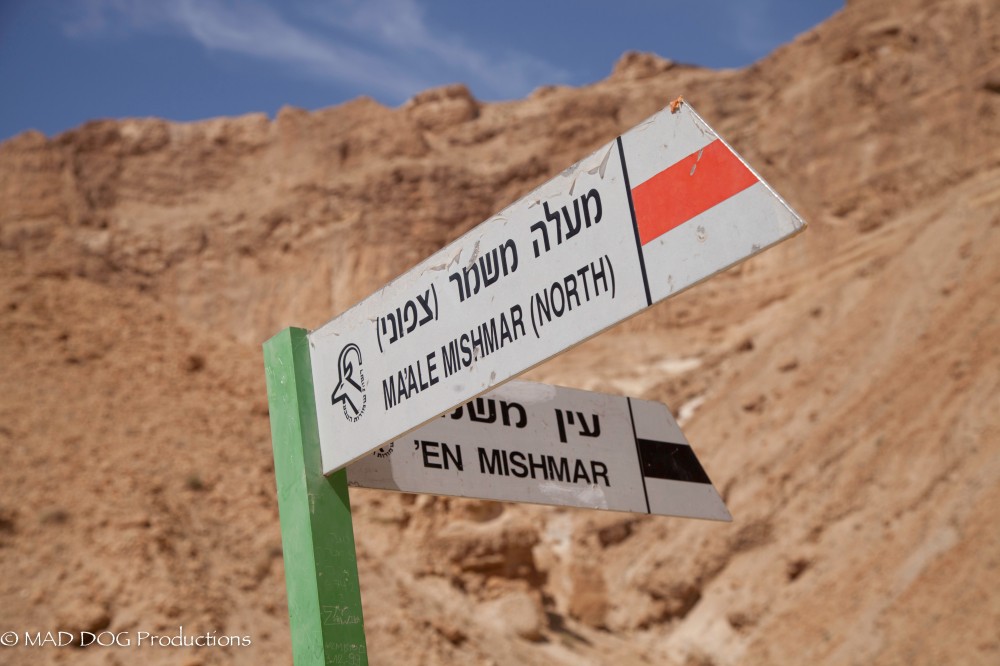 Hmmm… I pondered for a little bit, double checked I had plentiful water and food and decided to explore Ma’ale  Mishmar (North)… The trail was quite a doozy gaining nearly 1,000 feet to the Judean Plateau over scree and loose boulders but I was rewarded with wonderful views of the spring. 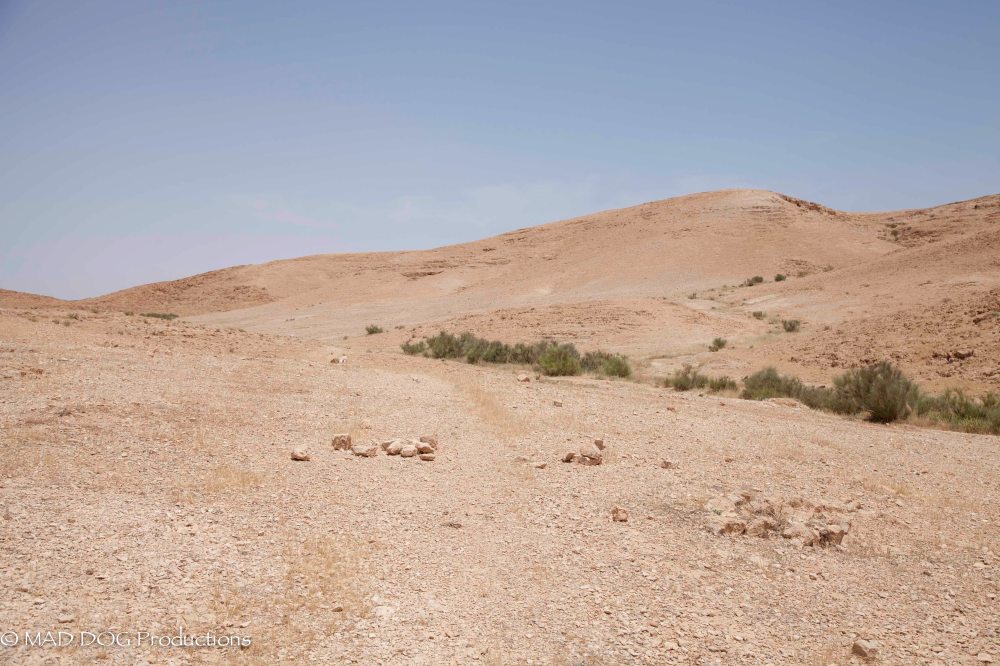 I did find some things clinging for life in the arid climate. I found these bugs/beetles and flowers all over the place.

After hiking on the plateau for an hour or so, I turned around and began to hike back. The trail back bounces along the rim of the canyon allowing you to really appreciate the immensity of the canyon.

On the hike up I met a Israeli father and son where were out for the same hike. They were very nice and gave me all sorts of other beta for canyons in the area. As I took the shot below, they yelled to me “California” (Arnold accent)… Nice guys! 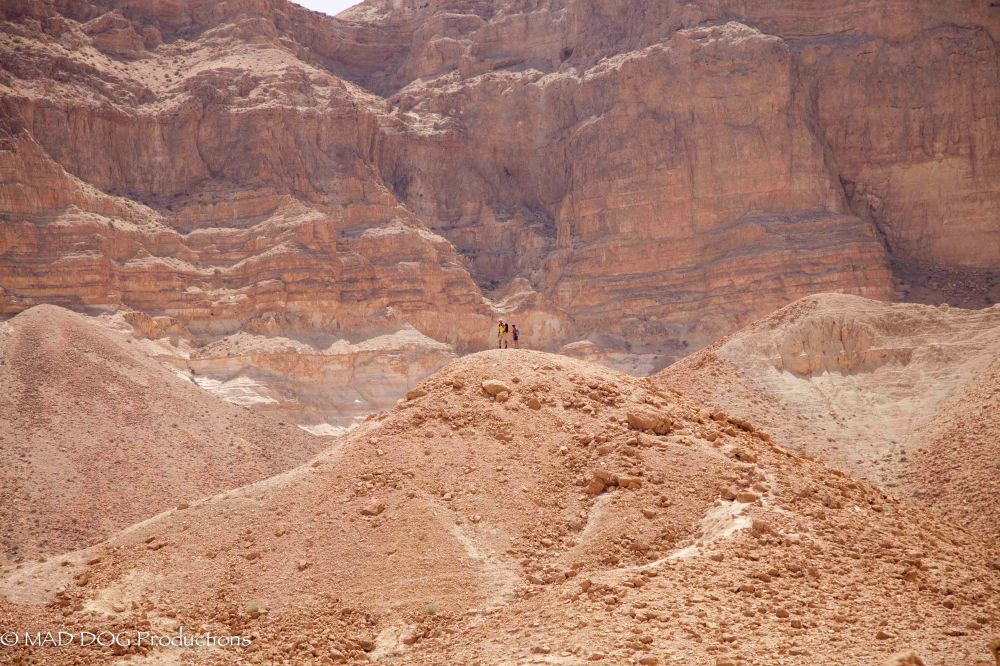 The rest of the hike was uneventful from a scenic perspective but I randomly started talking to another group of hikers. I spoke with them for a while and it turns out one of them is from Thousand Oaks. He graduated from Thousand Oaks High School (Go Lancers!) the same year I did and then moved to Israel – small world! After hiking with them for an hour or so we exchanged digits and perhaps we will grab a beer in the next few weeks. Well that was Part 1 of my Wadi Walkabout… Part 2 is coming soon!